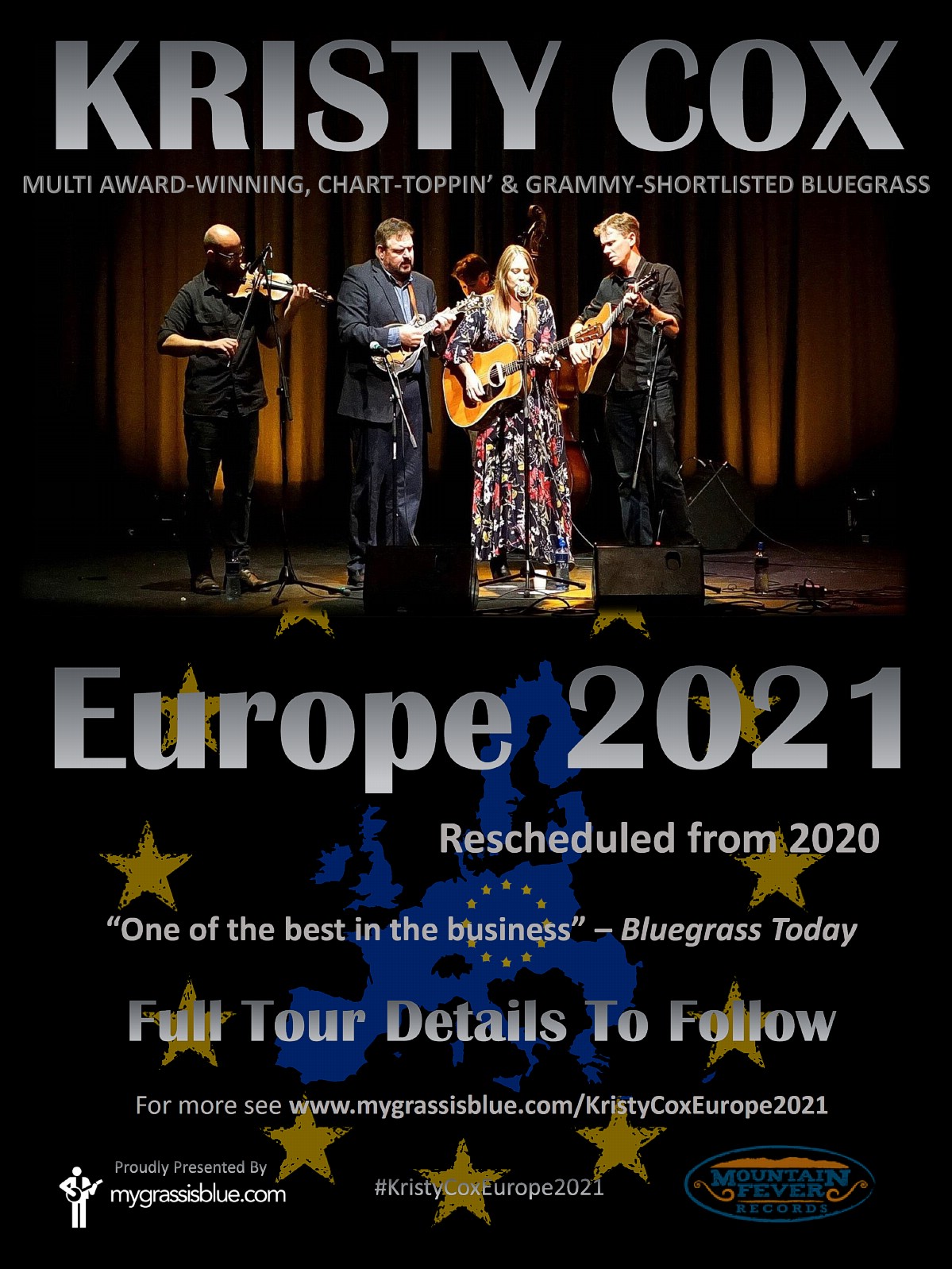 To European Program or Event Directors

If you’re a bluegrass-friendly event or venue Program Director who would be interested in hosting Kristy Cox and her band as part of their May 2021 tour of Europe, we’d love to hear from you.

Postponed in 2020 😡 due to the Covid-19 pandemic 😷, we’re proud to announce Kristy Cox Europe 🇪🇺 2021. We’re busy once again networking with local bluegrass enthusiasts, festivals and venues in countries all over Europe to reschedule the tour. It’s one more year of planning to make it even better than it would have been in 2020. Proudly presented by mygrassisblue.com, the extensive month-long multi-country tour is tentatively scheduled to run for the month of May 2021.

Fresh off her latest Golden Guitar success, chart-toppin’ Nashville-based golden girl Kristy Cox, no stranger to a European stage and following on from an inaugural tour of Ireland 🇮🇪 in May of 2019, is excited to be returning to Europe 🇪🇺 in May 2021 following the bitter disappointment of the tour’s original postponement in 2020 as a result of the global Covid-19 pandemic.

… one of the best in the business.

Capturing attention for her youthful energy-infused bluegrass, song writing acumen, and powerful singing style, Kristy was shortlisted by the IBMA four years running for New Artist of the Year and Female Vocalist of the Year, and was a finalist in the 2019 IBMA Momentum Awards for Vocalist of the Year. She continues to enjoy radio success in both the US and in her native Australia where she’s a four-time CMAA (Country Music Association of Australia) Golden Guitar Award recipient – having won in 2015 and 2017, Kristy has won the Golden Guitar Award for Bluegrass Recording of the Year two years running, most recently in 2020 for ‘Yesterday’s Heartache’ and in 2019 for ‘Ricochet’, the latter off her first release with the Virginia-based bluegrass-only Mountain Fever Records label. Ricochet debuted in the US at #1 on the Billboard Charts for Bluegrass Album and was shortlisted for the Grammy Award for Best Bluegrass Album. ‘Ricochet’, the first single release and title track off the album, gave Kristy her first US number 1 on the Bluegrass Today Radio charts; top of the pile for two successive weeks, it unseated legends Dolly Parton and Rhonda Vincent from the top spot. She again hit #1 on the chart with the subsequent Ricochet single release ‘I Can Almost Smell the Smoke’, while ‘South To North Carolina’, the third single release off the album, was Sirius XM’s Bluegrass Junction #1 played record for January 2019. And Kristy’s success shows no sign of abating. Late 2019 and early 2020 brought more chart success with ‘Yesterday’s Heartache’, ‘Train’ and ‘No Headlights’, the first three single releases from her second Mountain Fever Records album release, early 2020’s No Headlights.

Kristy Cox is making a repeat visit to my favorites list. This Australian transplant captured lightning in a bottle when she teamed up with producer and writer Jerry Salley a couple of years ago, and the combination is still magical. On Ricochet, Cox steps it up a notch or two as a vocalist, making her one of the best in the business. Lots of strong songs here, but my favorite is a heartbreaking duet with Brandon Rickman on ‘A Bed This Cold’, which Rickman wrote with Salley.

– David Morris of Bluegrass Today including Ricochet in Dave’s Dozen for 2018, his favourite 12 releases of 2018 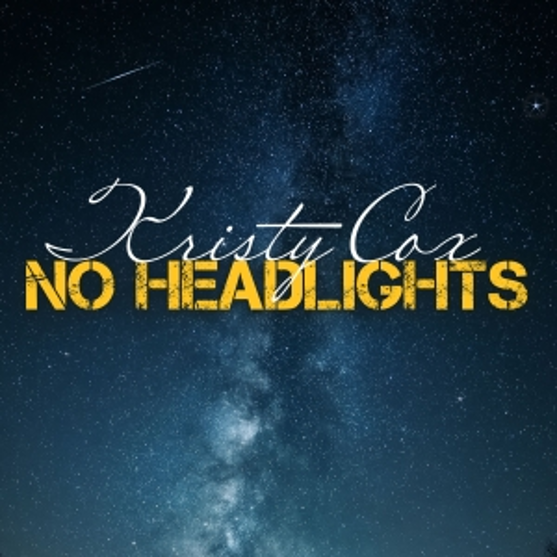 From The Label
International Bluegrass star Kristy Cox is sure to delight listeners with No Headlights, her follow up to 2018’s smash Ricochet. How the superstar singer, songwriter, small business owner, and mother of two does it is mystery, but Kristy waltzes through her life with a joy and energy that is nothing short of addictive.
Scheduled for release on February 28, the album spawned three pre-release singles, ‘Yesterday’s Heartache’, ‘Train’ & the album title track, ‘No Headlights’.
Although Cox is a fantastic songwriter in her own right, the album’s first single ‘Yesterday’s Heartache’ is another in a long line of exceptional music from the Nashville-based hit singer/songwriter Jerry Salley (accompanied by Kelli Kingrey and Bruce Carpenter). The track features Kristy’s deep and soulful voice that fans have come to know and love. Written by Bill Whyte, Steve Dean, and Daisy Mallory, the album’s second single ‘Train’ is an upbeat tune about a girl who has been treated wrong for the last time, while the third single and title track, ‘Yesterday’s Heartache’, which debuted at number 5 on the Bluegrass Today charts in late January 2020, is a dark and powerful song written by Liz Hengber, Tammy Rogers, and Jerry Salley. Kristy’s delivery is again perfect as she sings the tale of a friend who vows to make sure her friend is never abused again.
A familiar roster of all-star bluegrass session musicians helped lay down the tracks for the album, including Jason Roller (guitar & fiddle), Mike Bub (bass), Justin Moses (mandolin and dobro/reso-guitar), and Aaron McDaris (banjo), with Tammy Rogers and Jerry Salley helping out on harmony vocals. 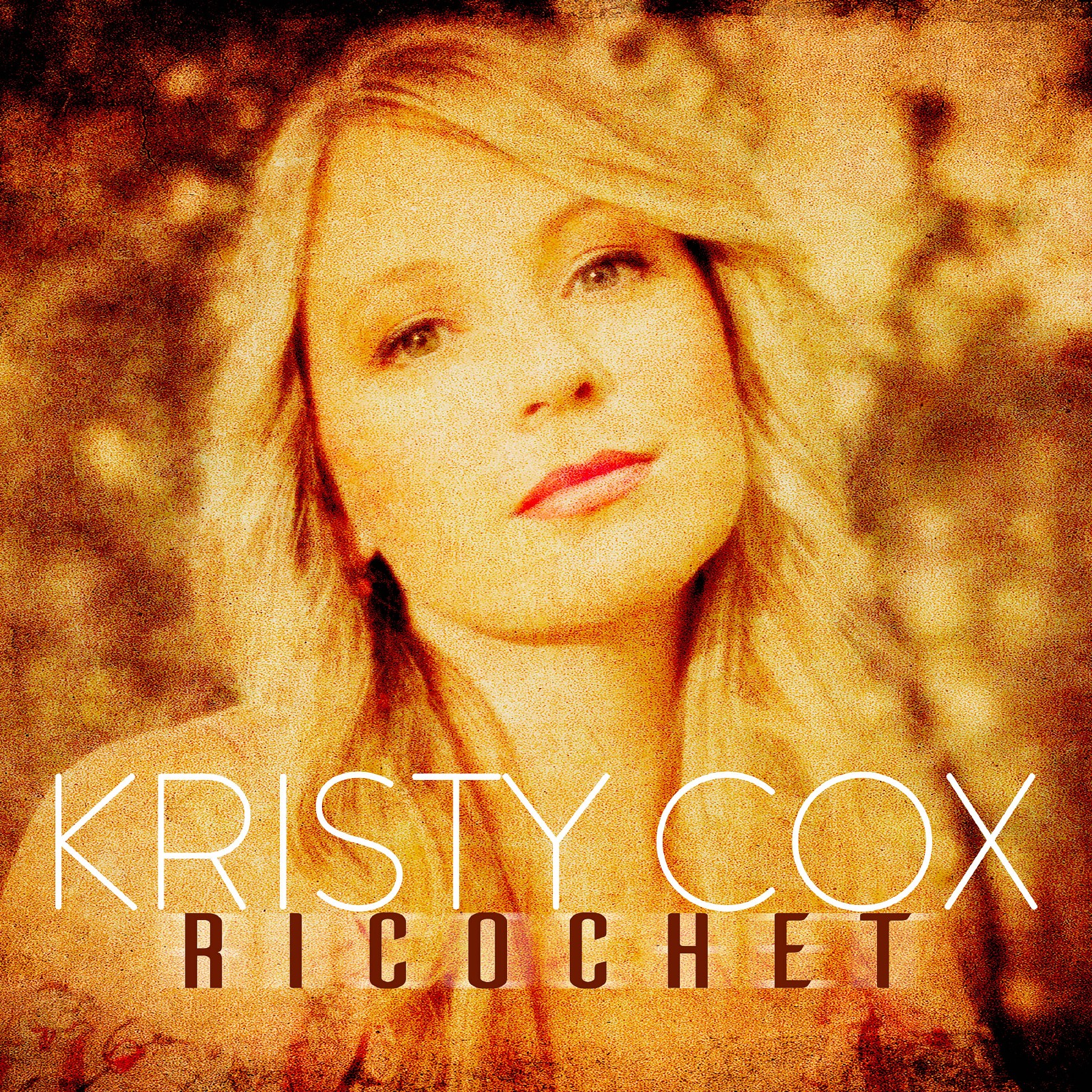 From The Label
For 2018’s #1 Billboard Album Debut & Grammy shortlisted Ricochet, Kristy Cox once again teamed up with producer and renowned songwriter Jerry Salley; seven of the ten tracks on the album were co-written by one or both of them. Proving to be quite the formidable pairing in writing and recording great bluegrass and acoustic country music, to date the album has spurned two Bluegrass Today number one singles for ‘Ricochet‘ (Kristy’s first US #1, it topped the charts for two successive weeks knocking legends Dolly Parton and Rhonda Vincent from the top spot) and ‘I Can Almost Smell The Smoke’, while the third single release, ‘South To North Carolina’, was Sirius XM’s Bluegrass Junction #1 played record for January 2019, a song that will resonate well with die-hard bluegrass fans and which proves that Aussie Cox is equally at home in the US, both musically and geographically. Another album highlight is ‘A Bed This Cold’, a duet with Brandon Rickman of the Lonesome River Band, who also penned the song with Salley. Additional guest vocalists include Salley, Rogers, Maggie Salley, Donna Ulisse, and Josh Swift. Adding to this already solid recording is an all-star cast of musicians: Jason Roller (fiddle/guitar); Justin Moses (Dobro/mandolin); Aaron McDarris (banjo); and Mike Bub (bass). Ricochet will likely find a rightful spot among listener’s favourites, thereby giving Kristy Cox some well-deserved longevity in bluegrass music. 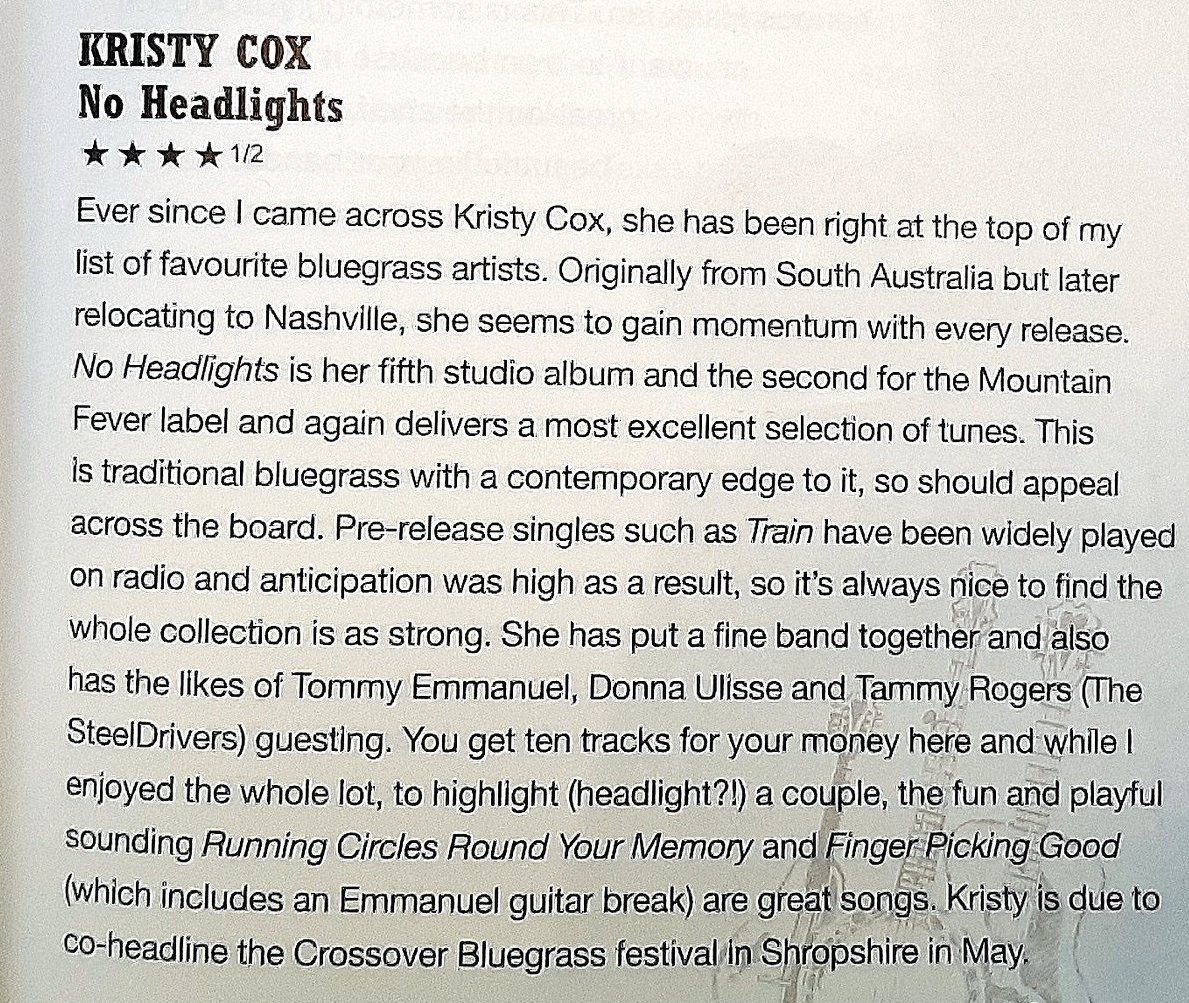 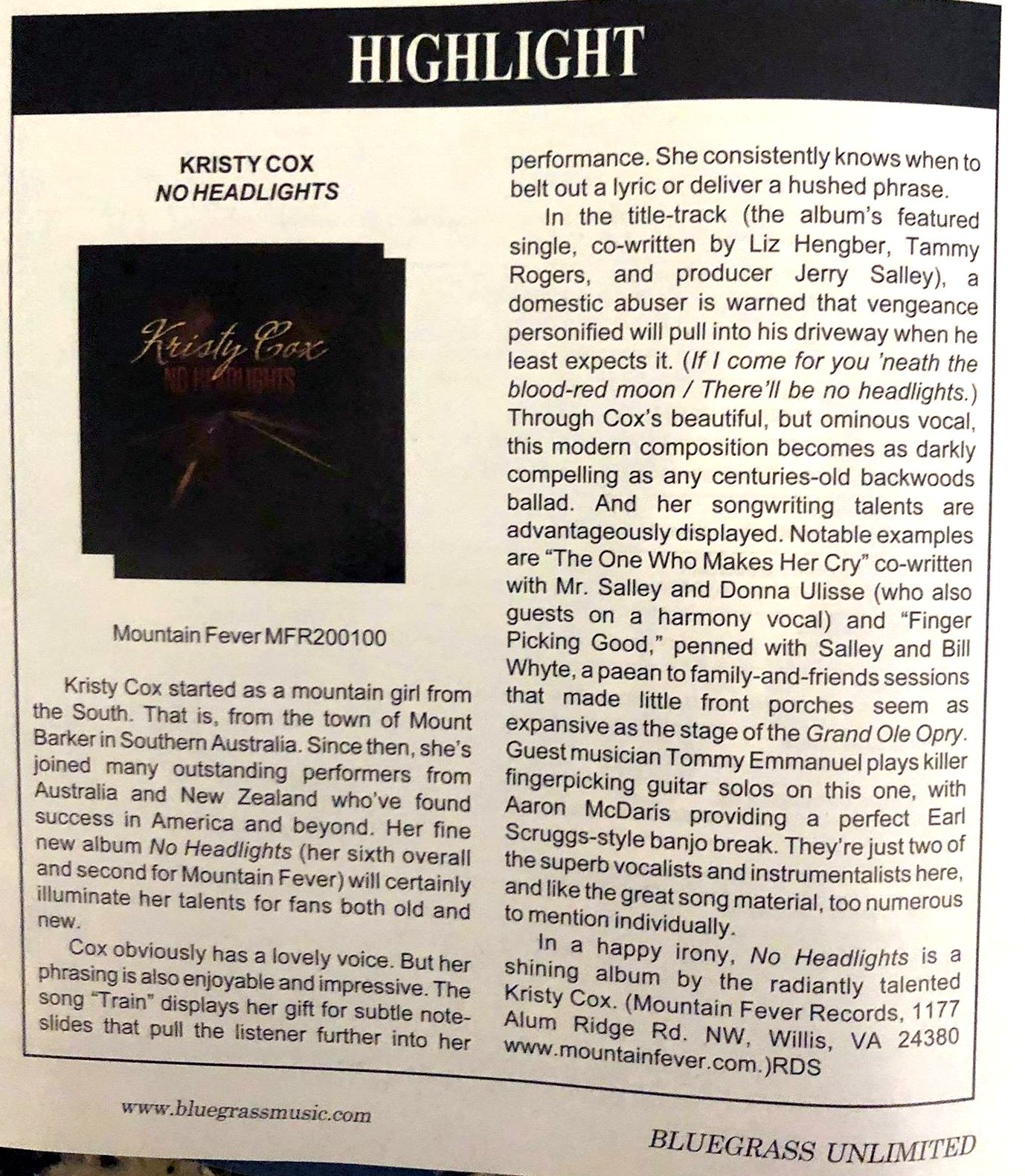 … No Headlights is a shining album by the radiantly talented Kristy Cox. 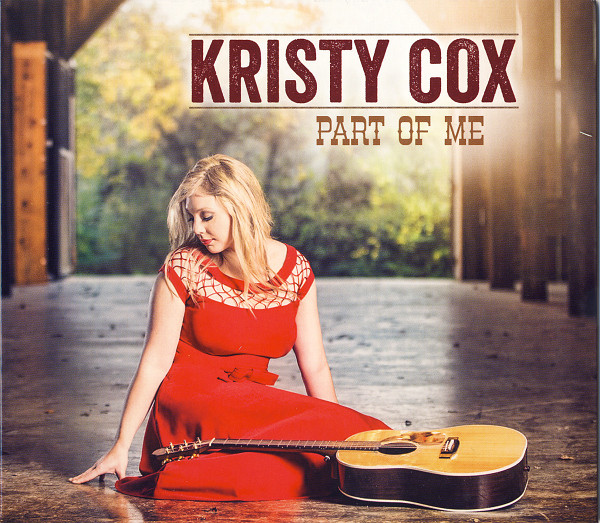 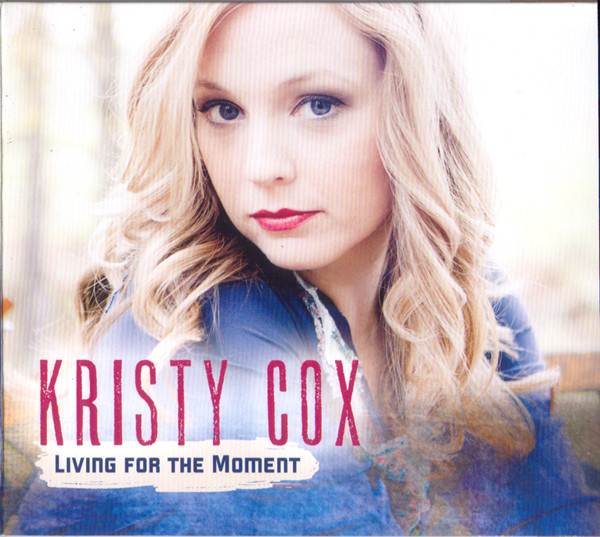 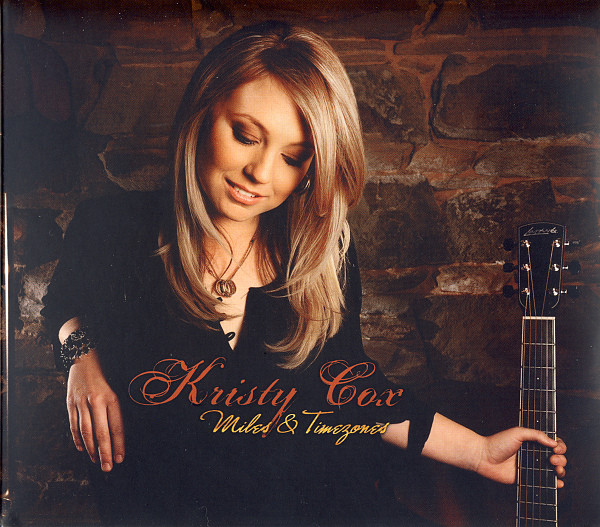 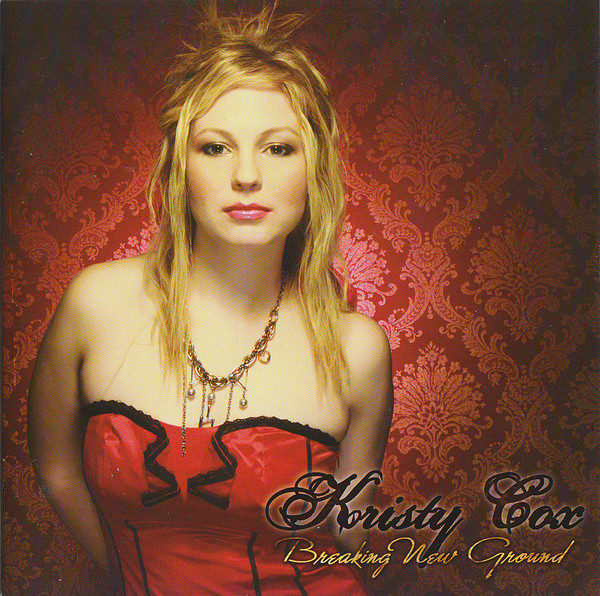 The official video for ‘Another Weary Mile’ from the 2016 album Part of Me.