The Tennessee Mafia Jug Band Lite. Less of What's Bad For You, All of The Fun!
? 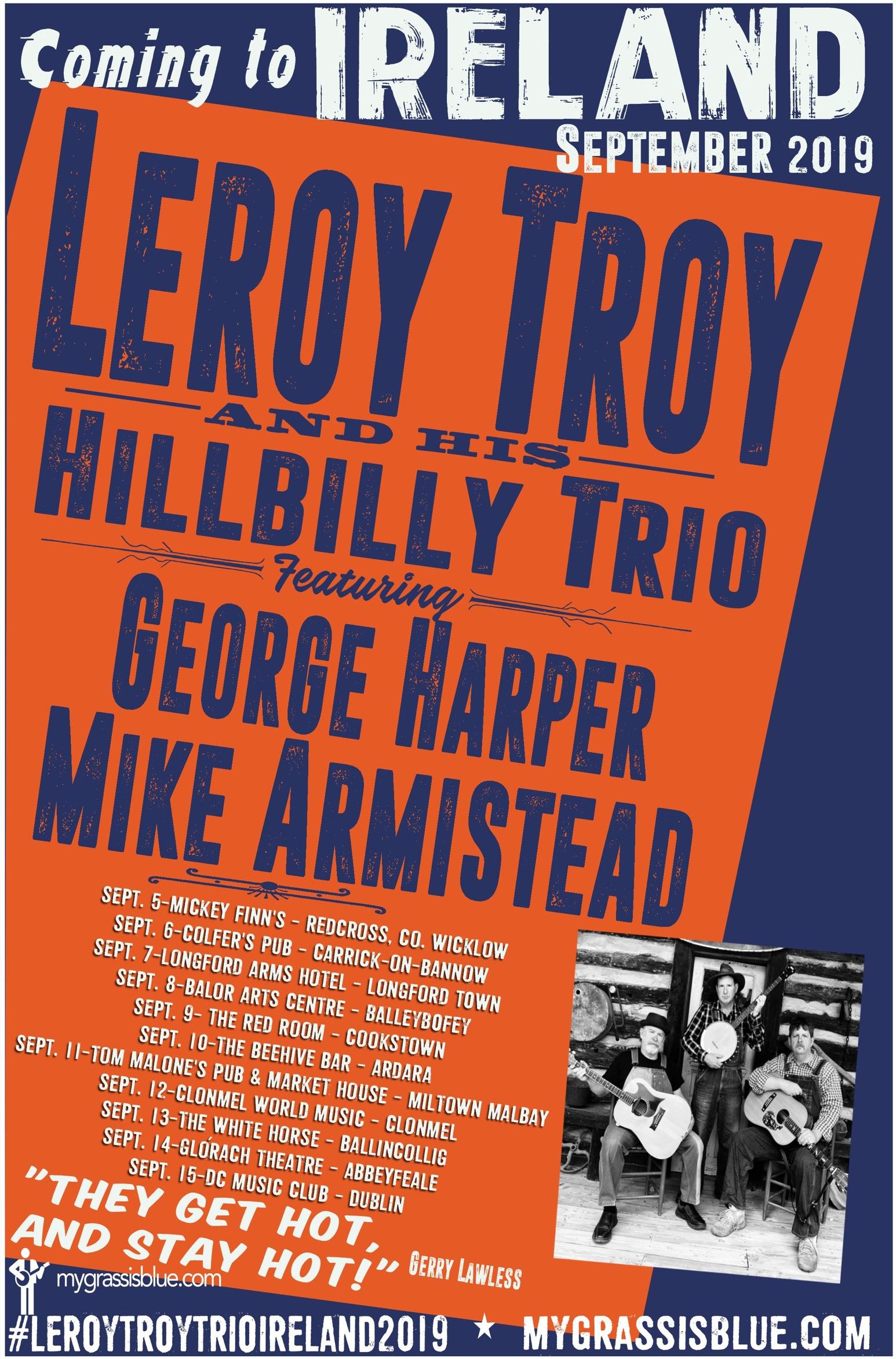 It’s The Tennessee Mafia Jug Band Lite. It’s less of what’s bad for you, but all of the fun. It’s old-time slapstick entertainment with a capital ‘N’!

Three stumblebum musicians go on a quest for a great sounding musical and come up with this! Masterpiece!!

That kind of humour and presentation, if it’s handled right, it’ll work anywhere, because of its authenticity.

Leroy Troy And His Hillbilly Trio | Ireland 2019
Making a welcome return to Ireland, this is a trio with an utter lack of self-consciousness (and some might say any sense of decorum), a trio that know the music, wear the costumes, tell the corny jokes, and do the slapstick gags that throw an audience into hysterics. The 11-gig nationwide tour kicks off in our home county of Wicklow on September 5th before embarking on a loop through some familiar, hillbilly-friendly venues – we’re especially looking forward to Leroy’s September 7th return to Longford Town, setting, of course, for the much-missed Johnny Keenan Banjo Festival (Leroy was on the bill of the last festival to be staged in Longford in 2011). Bolstered by bevy of new material recorded just for the tour (listen up for the track “The Best Cooks I’ve Ever Seen”), this is a trio who are looking forward to both reconnecting with their friends from past visits and to making friends anew.

Leroy ‘The Tennessee Slicker’ Troy
It’s all in the name. This touring Hillbilly Trio will be led by the one & only Leroy Troy. Although little introduction is needed, we’ll give him one anyway – as Roy Rogers was to the Sons of the Pioneers, so Leroy Troy is to the Tennessee Mafia Jug Band. The Sultan of Goodlettsville, the Most Popular Man in Country Music, the ole Tennessee Slicker himself, Troy – who plays banjo, ukulele, and an elaborately outfitted scrubboard he calls “the washing machine” (in a style fashioned from long-ago Opry star Robert Lunn who played the scrubboard on Roy Acuff’s show) – has been a professional hillbilly musician since before his seminal old-time banjo act at the 1982 Knoxville World’s Fair captivated all; other career milestones include his 1988 debut on the Grand Ole Opry & winning the National Old-Time Banjo Championship in 1996. A past Champion and Grand Marshal from Uncle Dave Macon Days in Murfreesboro, Tennessee, Troy picked up his show business acumen from working with the Bailes Brothers (long ago members of the Grand Ole Opry) & is the undisputed heir to the banjo acrobatics and other performance skills of the late Uncle Dave Macon; Troy knows about every banjo “monkeyshine” that Uncle Dave ever performed, and then some – his resume lists ‘Accomplished flat-foot dancer’ & ‘TV Star’, the latter thanks to appearances on Hee Haw, Outsiders Inn, and as a weekly featured guest on The Marty Stuart Show. With old-time hillbilly star power in abundance, Leroy Troy knows how to work a crowd… and he does. He connects with the audience, and he’s looking forward to reconnecting with his Irish friends on his latest trip to the Emerald Isle in September.

3.6 million views and counting. A 2015 performance by Leroy Troy, accompanied by Mike Armistead, of ‘Grandfather’s Clock’ at Nashville’s Music City Roots ‘Live From The Factory’. It’s all on display here – the tomfoolery, the string acrobatics, and, of course, the talent.

Another from that 2015 performance at Nashville’s Music City Roots ‘Live From The Factory’, Leroy has the audience in stitches with a rendition of ‘Charming Betsy’.

Mike Armistead | Poster Boy This hillbilly ain’t just a pretty face. Mike Armistead has only gone and landed himself a 2019 IBMA Industry Award nomination for Graphic Designer of the Year (Industry Awards recognise outstanding work in non-performing industry categories), and it’s not hard to see why. Mike, a firm believer that good posters are more effective advertising than newspaper print ads or even radio, has been churning out visually arresting poster art for over a decade now, recreating that old time block letterpress printing look with bold, worn fonts, screaming colors, and eye-catching graphics. And we’re tickled pink that he put his skills to work for the tour. Suffice it to say, we just couldn’t help but adorn this page with his handiwork. 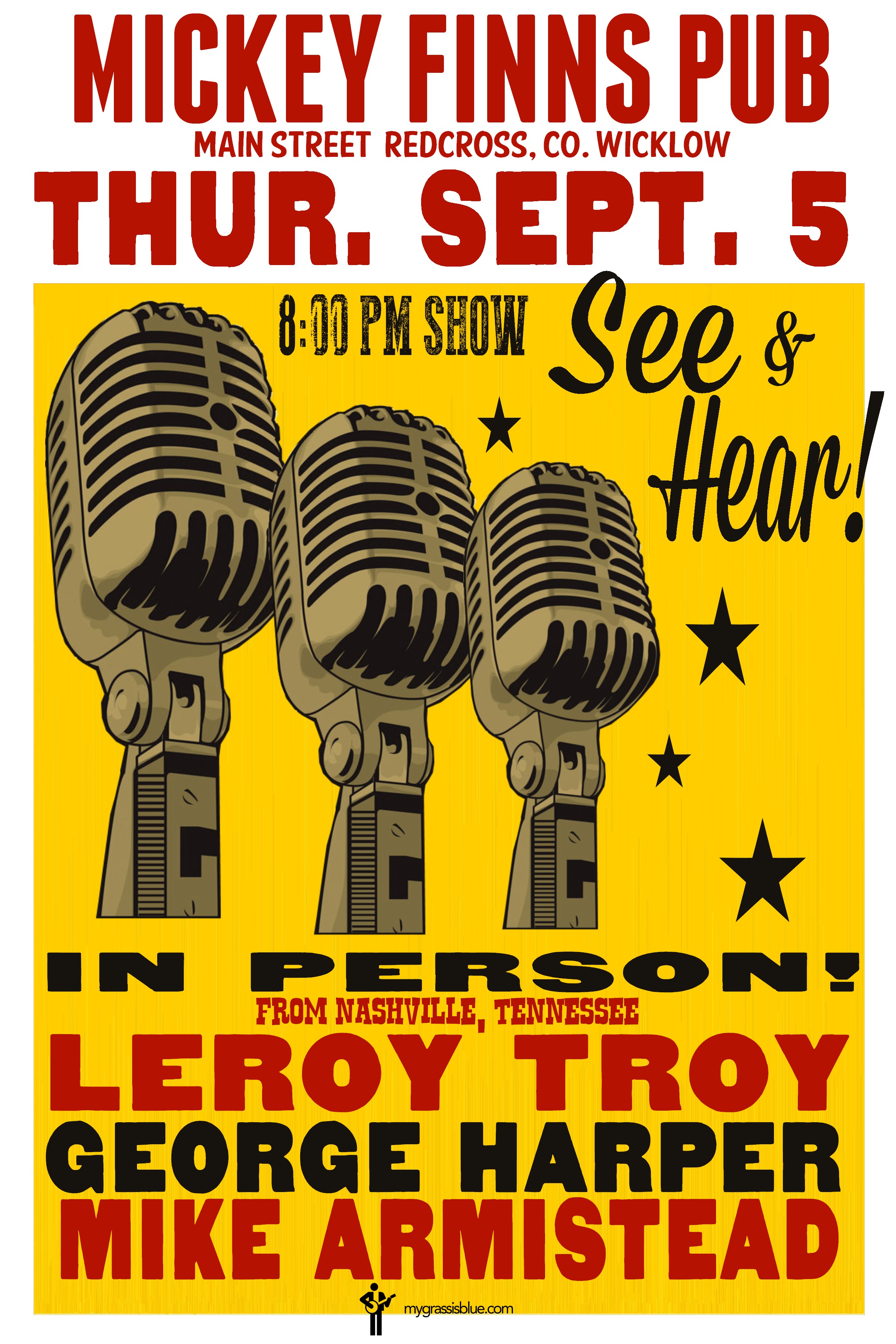 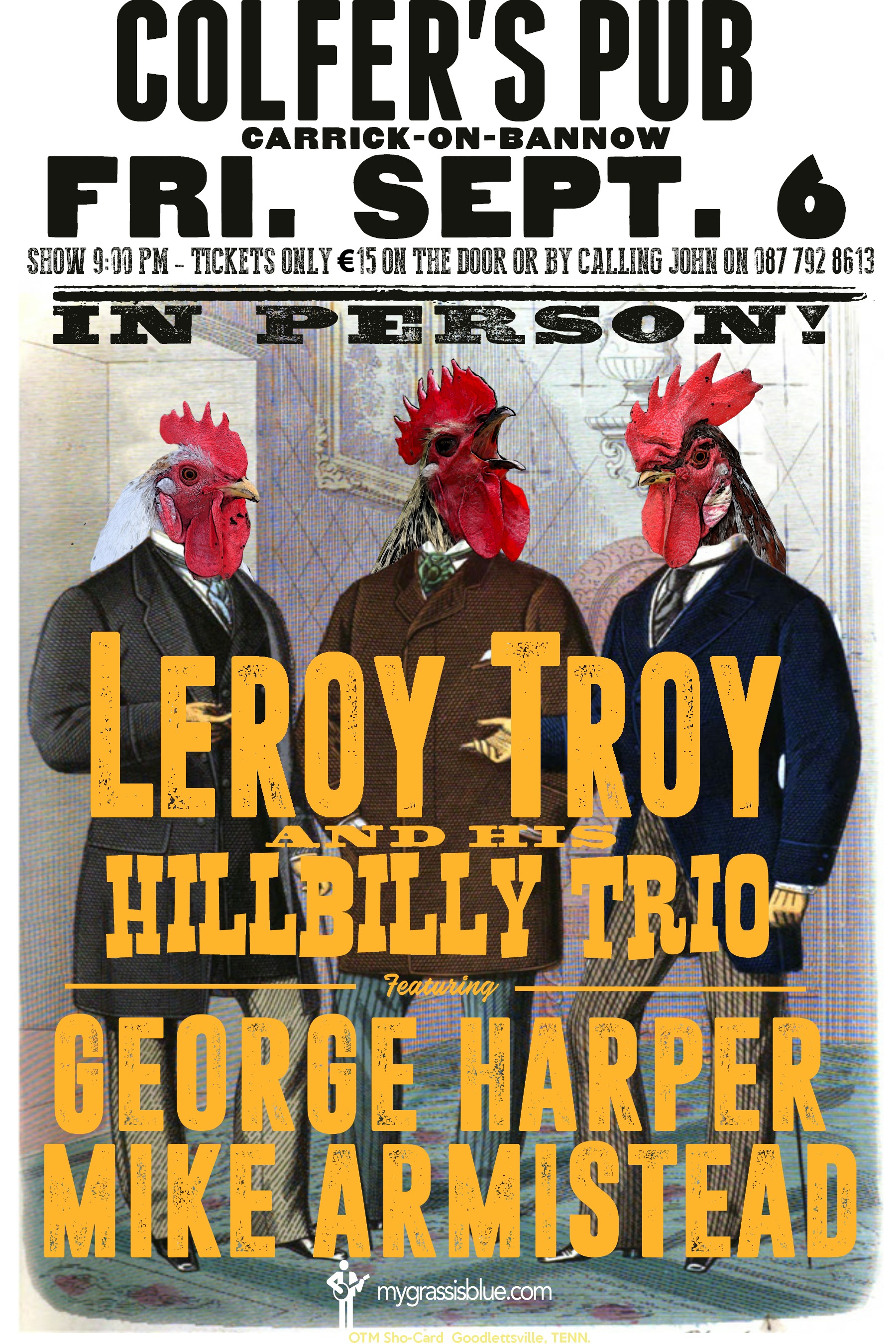 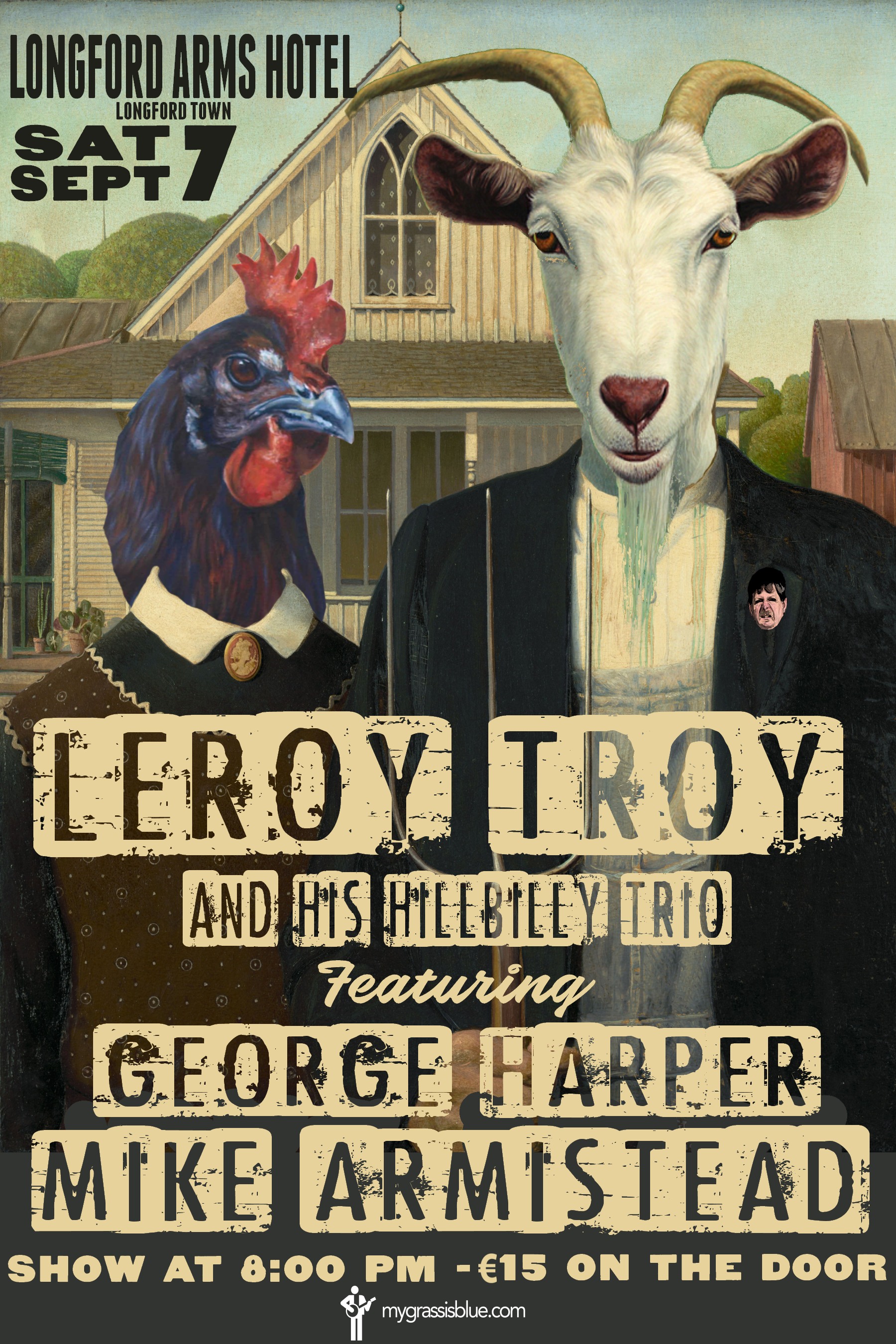 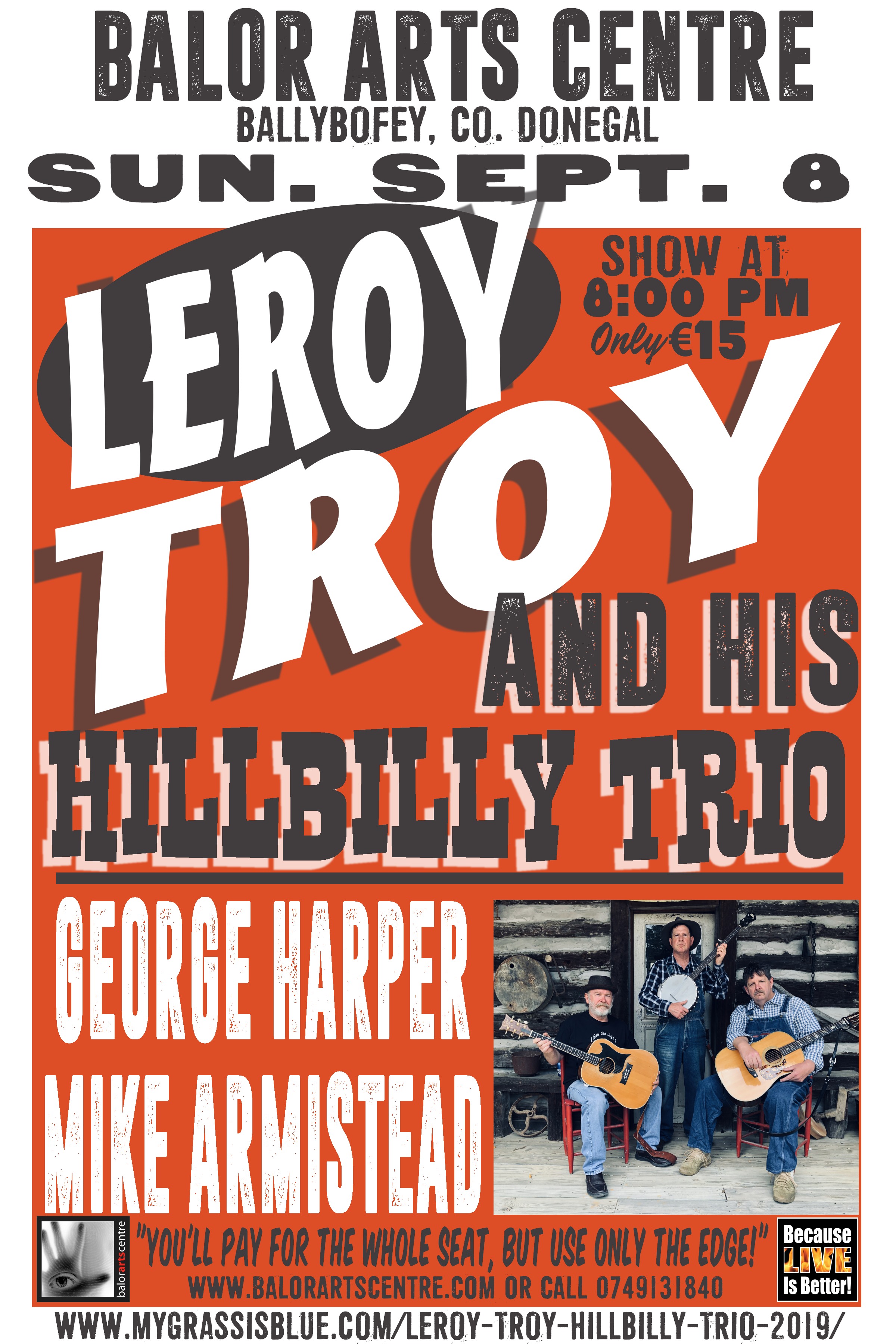 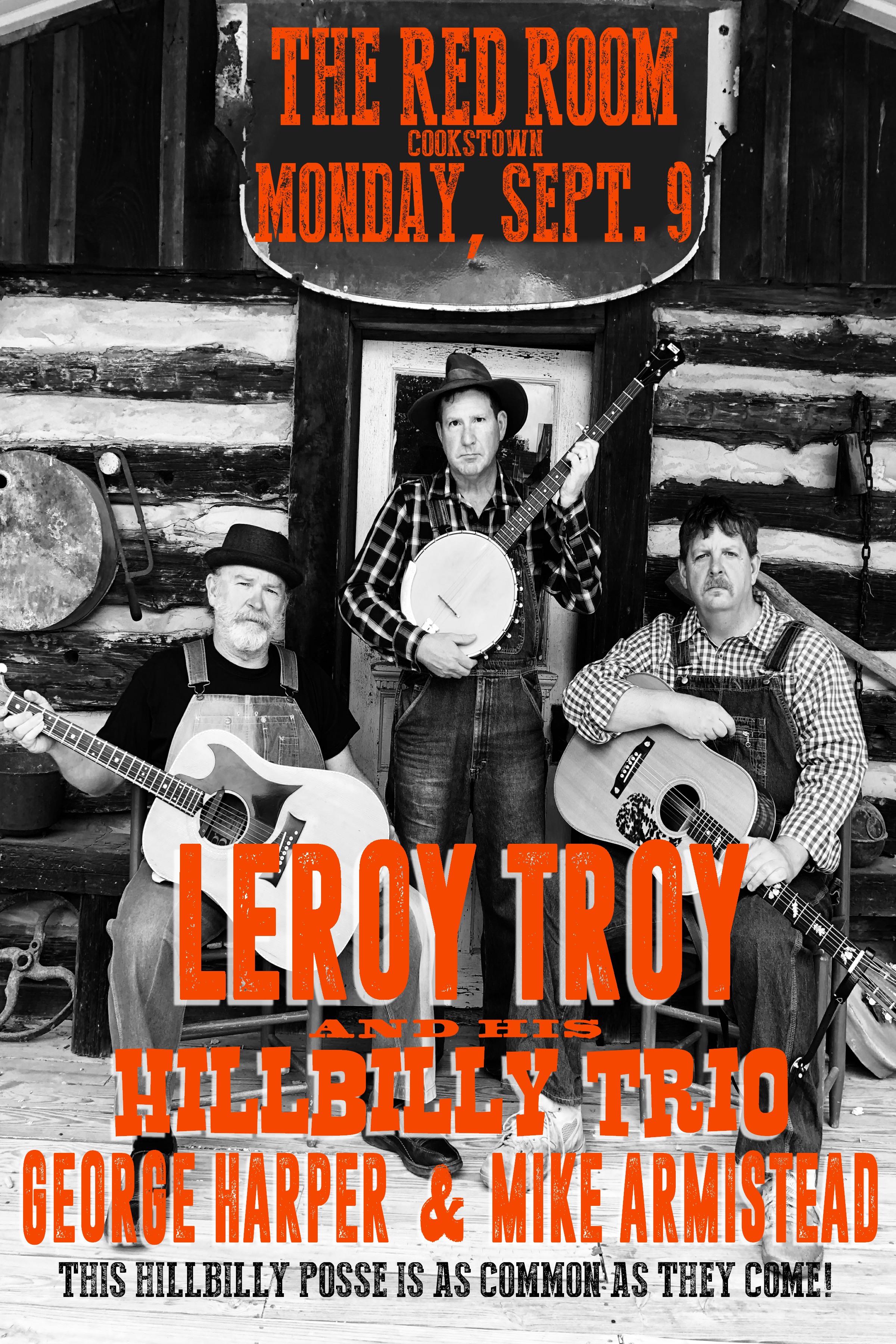 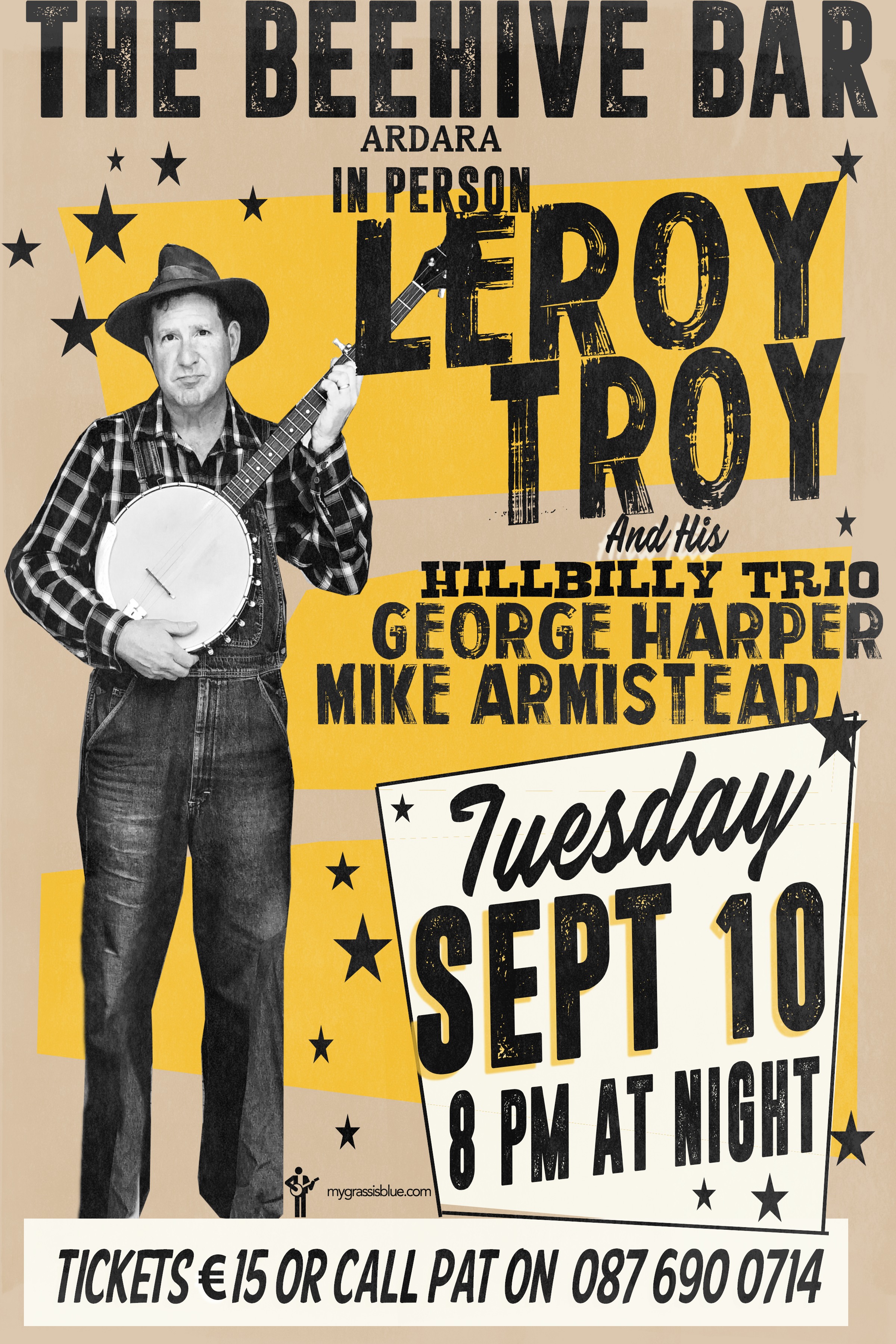 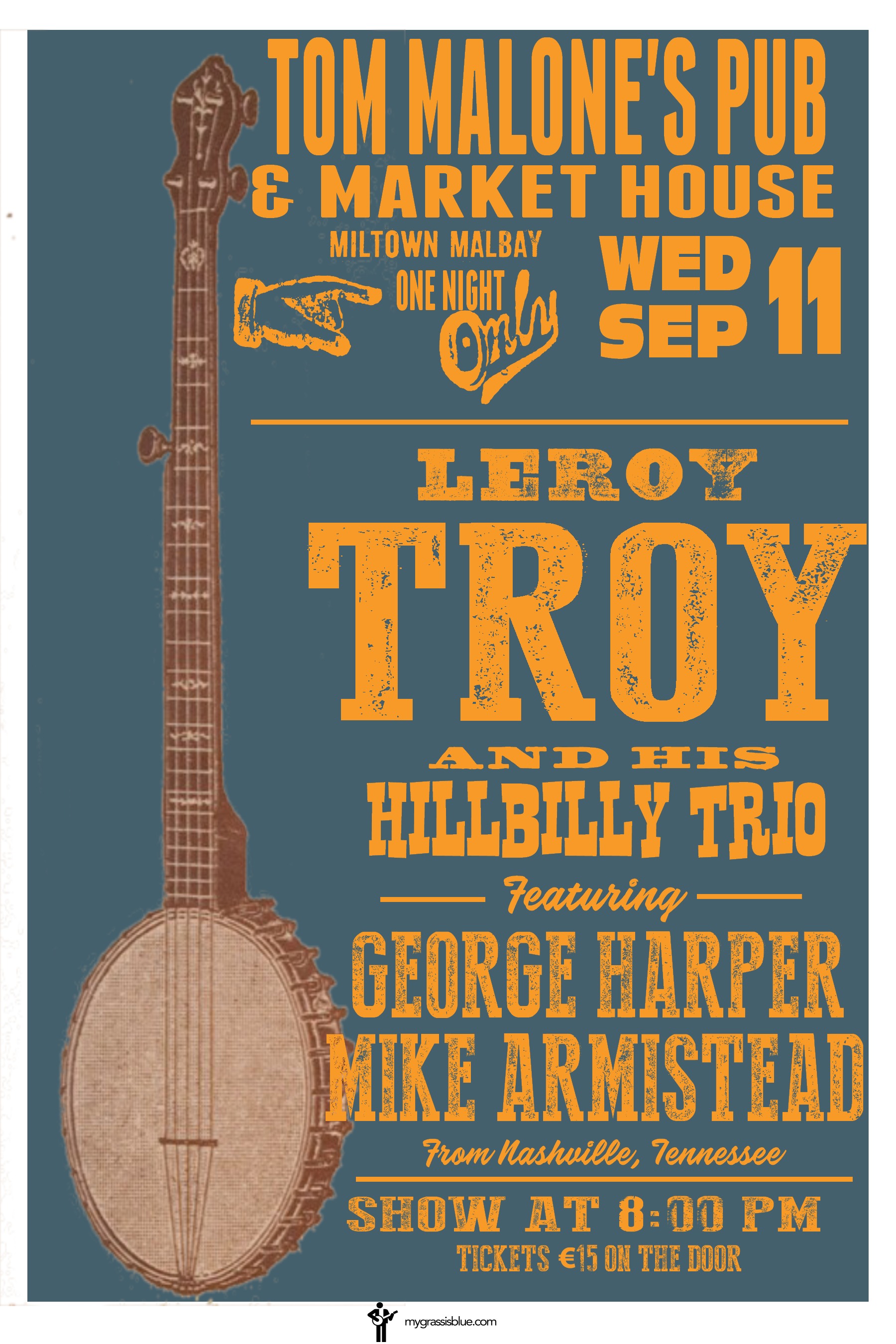 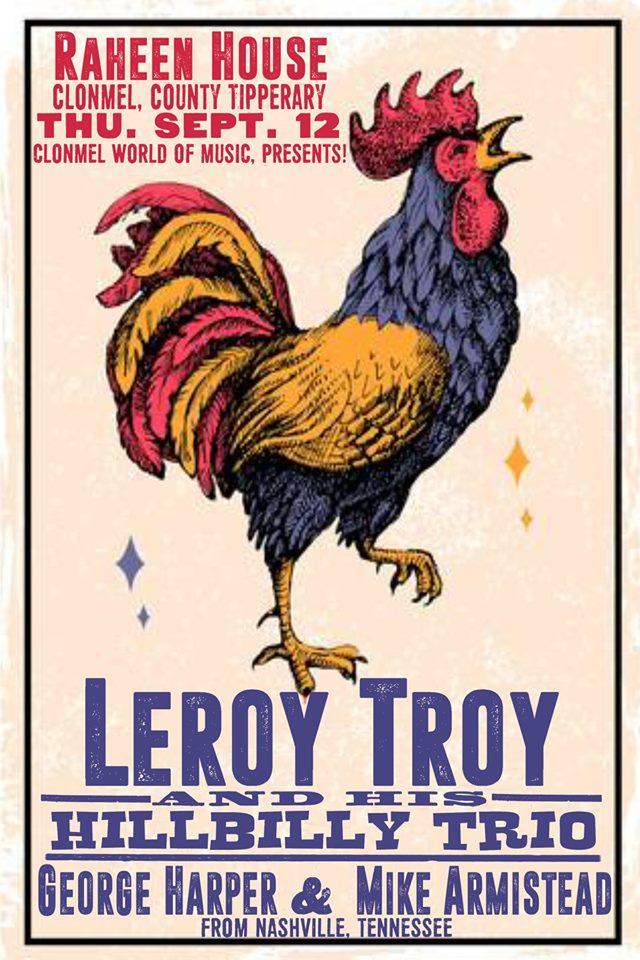 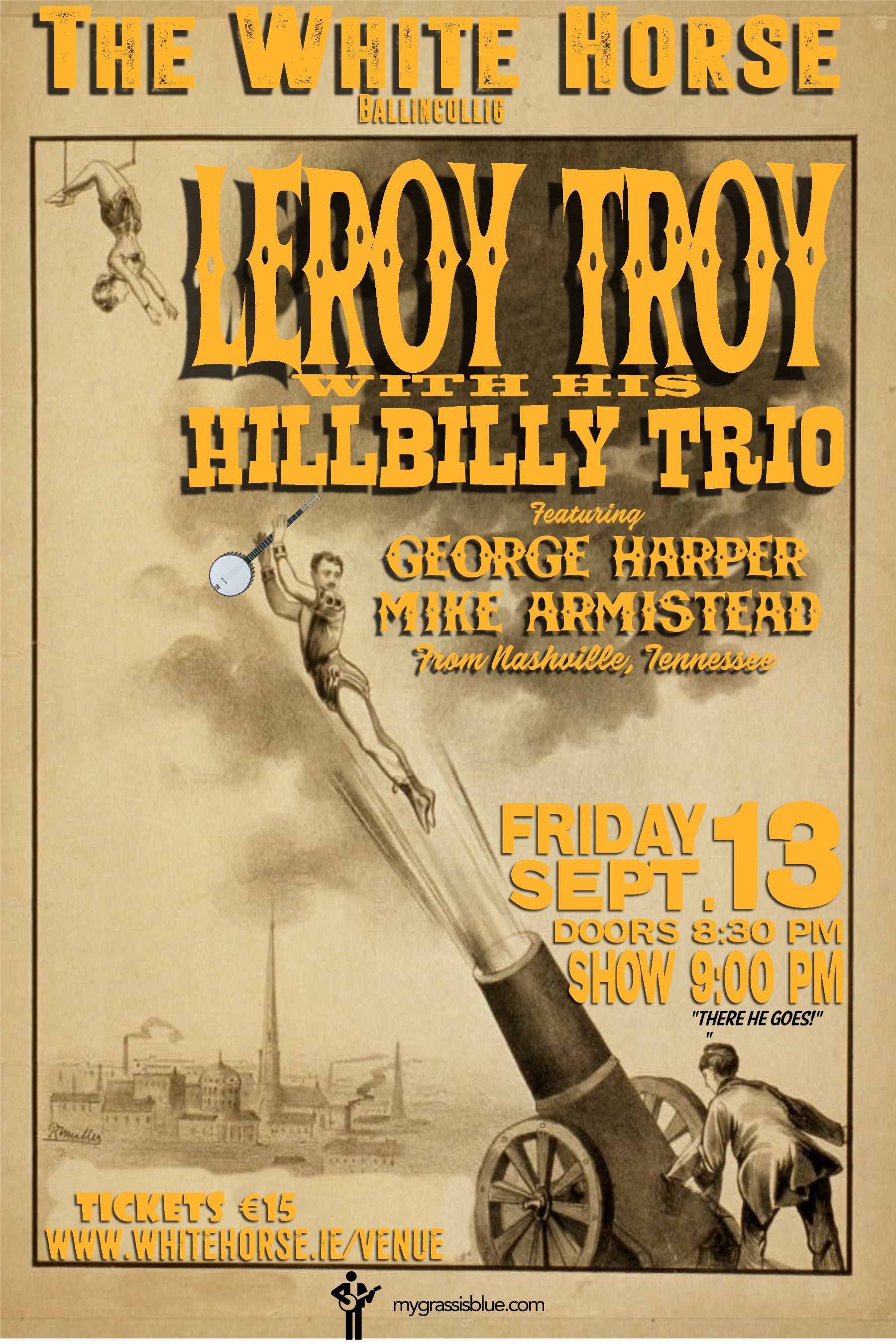 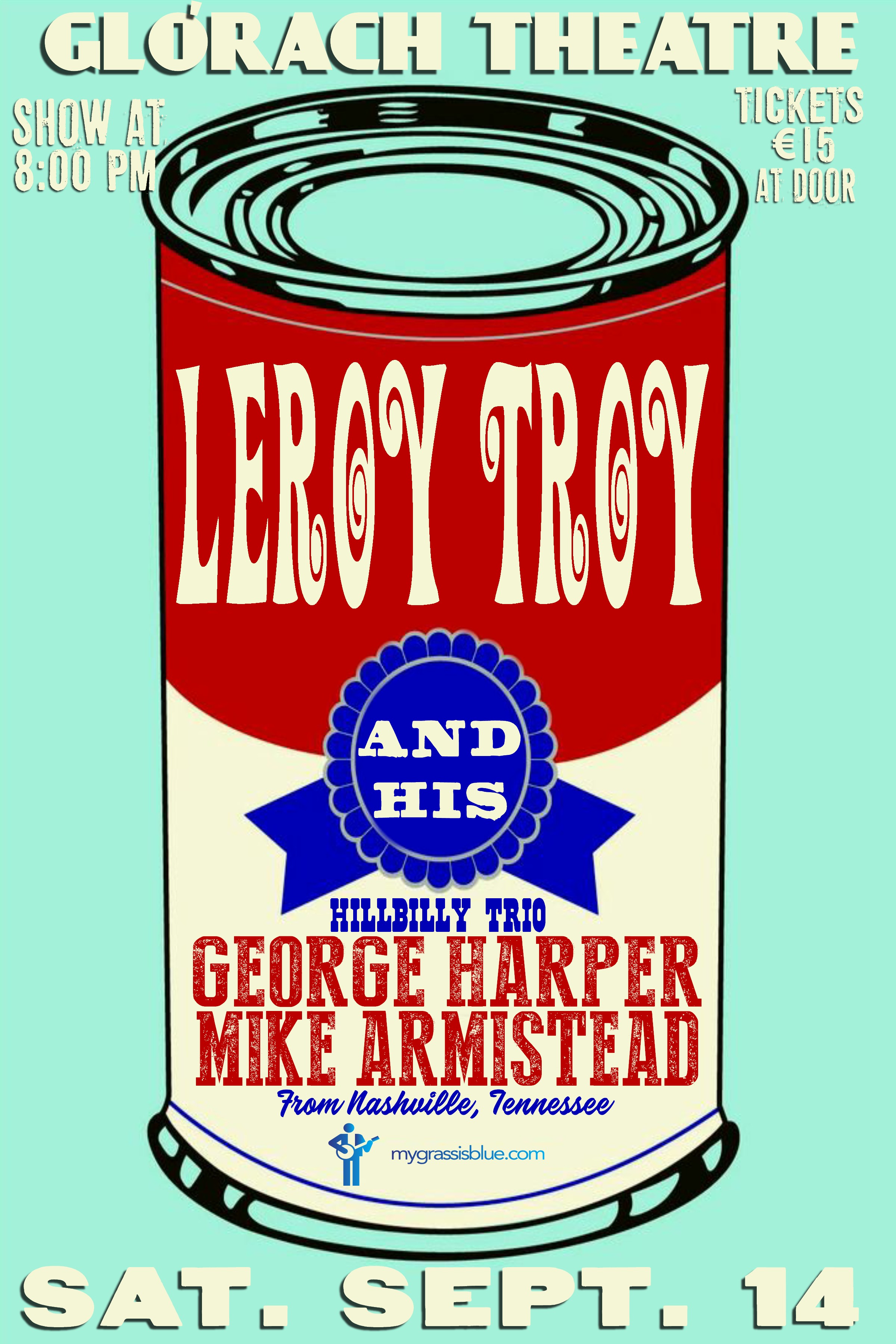 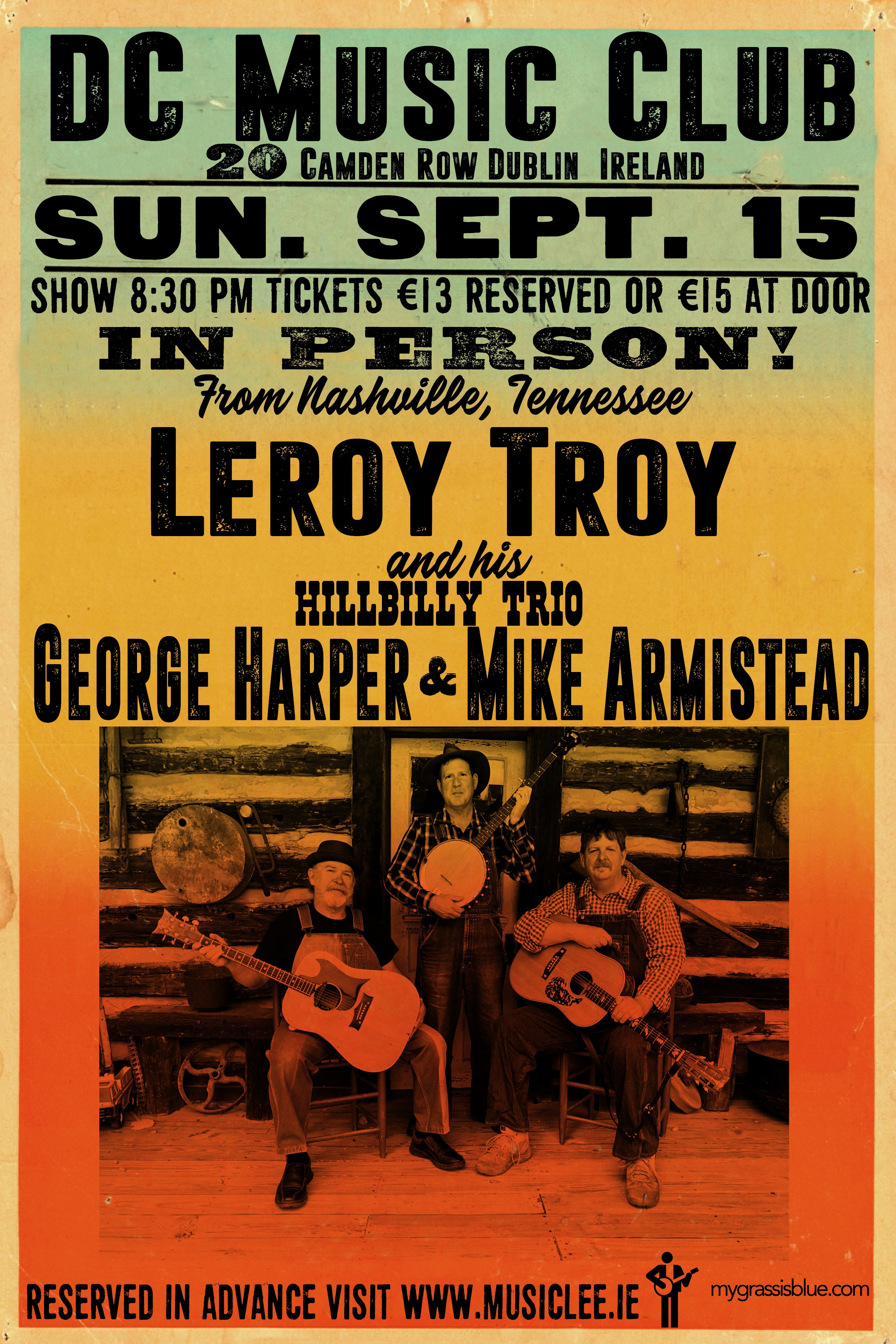 The Tennessee Mafia Jug Band
With ‘roots like wisdom teeth’, The Tennessee Mafia Jug Band do entertainment in the old-time mould like no other overall-clad outfit can. Brought to national prominence thanks to regular performances on Marty Stuart’s RFD-TV show, these polished entertainers have toured extensively, both nationally and internationally, and have graced the stage of the Grand Ole Opry, Washington, D.C.’s Kennedy Center, and Nashville’s Station Inn & Ryman Auditorium. And they are no strangers to Ireland either, with visits stretching back to the days of the much-missed Johnny Keenan Banjo Festival in Longford – their first visit to Ireland to perform collectively as The Jug Band was for the 2006 festival (Leroy & George were back again in 2009; Leroy was last here as a solo artist in 2011; George was here with his own band in both 2010 & 2012; & the Jug Band last entertained here to mostly sell-out crowds in late 2016). Recipients of the 2017 Blue Blaze Award at the 46th annual Smithville Fiddler’s Jamboree & Crafts Festival, given to musicians who actively cultivate a love of bluegrass music, this is a gallimaufry of accomplished musicians who just like to have fun as they brighten up the stage with an array of rib-tickling old-time tunes and a smattering of string acrobatics and general tomfoolery.

You’ll pay for the whole seat, but you’ll only need the edge!

Meet The Tennessee Mafia Jug Band and their penchant for old-time tradition & all things good fun.

With Thanks
We’d like to acknowledge the assistance of the following in helping to piece this tour together: Leigh & Ashley Williams in Mickey Finns, Redcross; John Murphy in Colfer’s, Wexford; Tom McGuire in Longford; Conor Malone in The Balor, Balleybofey; The Red Room’s Sharon & Arnie Loughrin; Pat McGill of The Beehive Bar, Ardara; Susan Flynn of Tom Malone’s Pub & Market House in Miltown Malbay; Gerry Lawless of Clonmel World Music; & John Nelligan of the Glórach Theatre in Abbeyfeale. 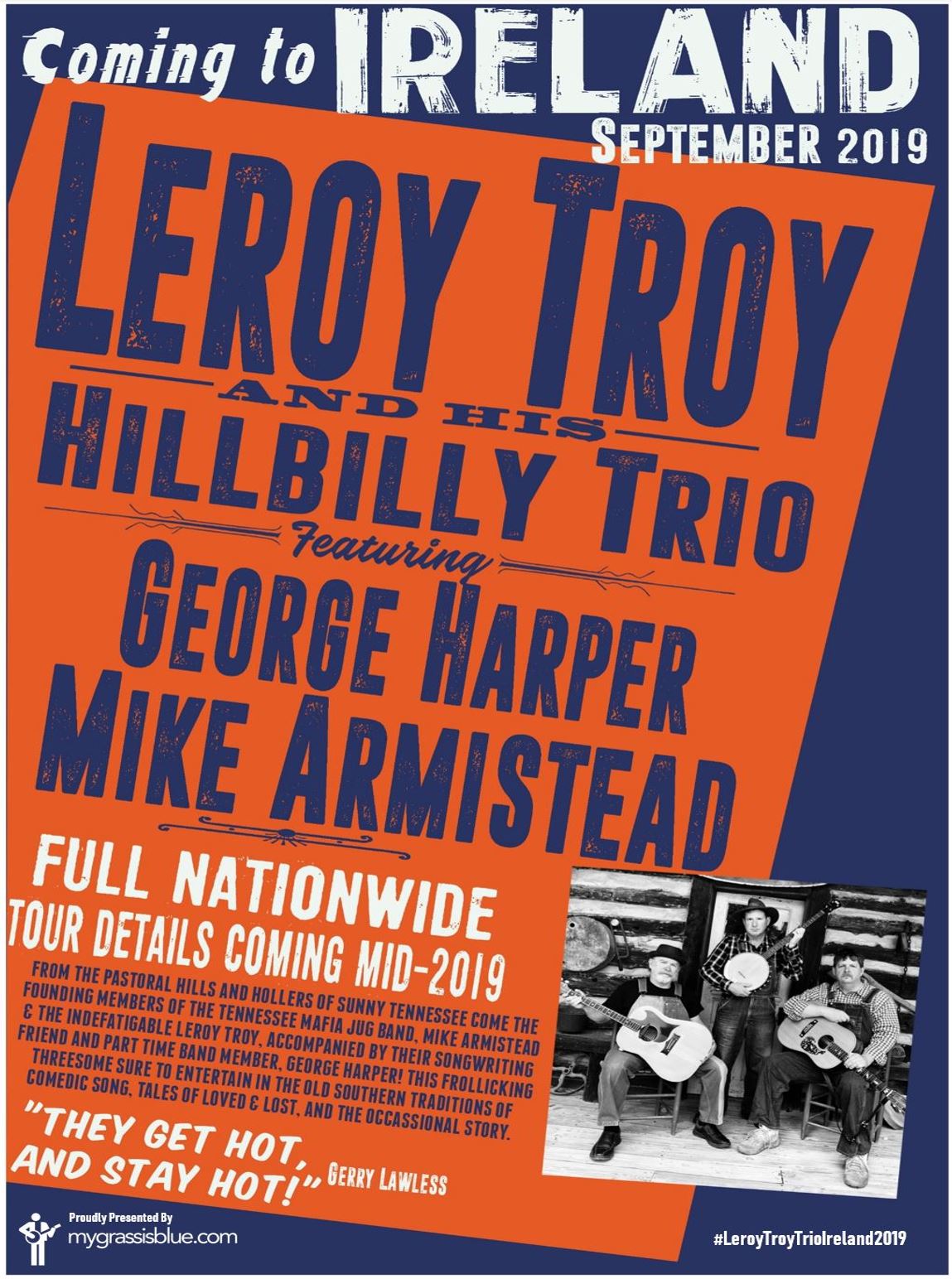