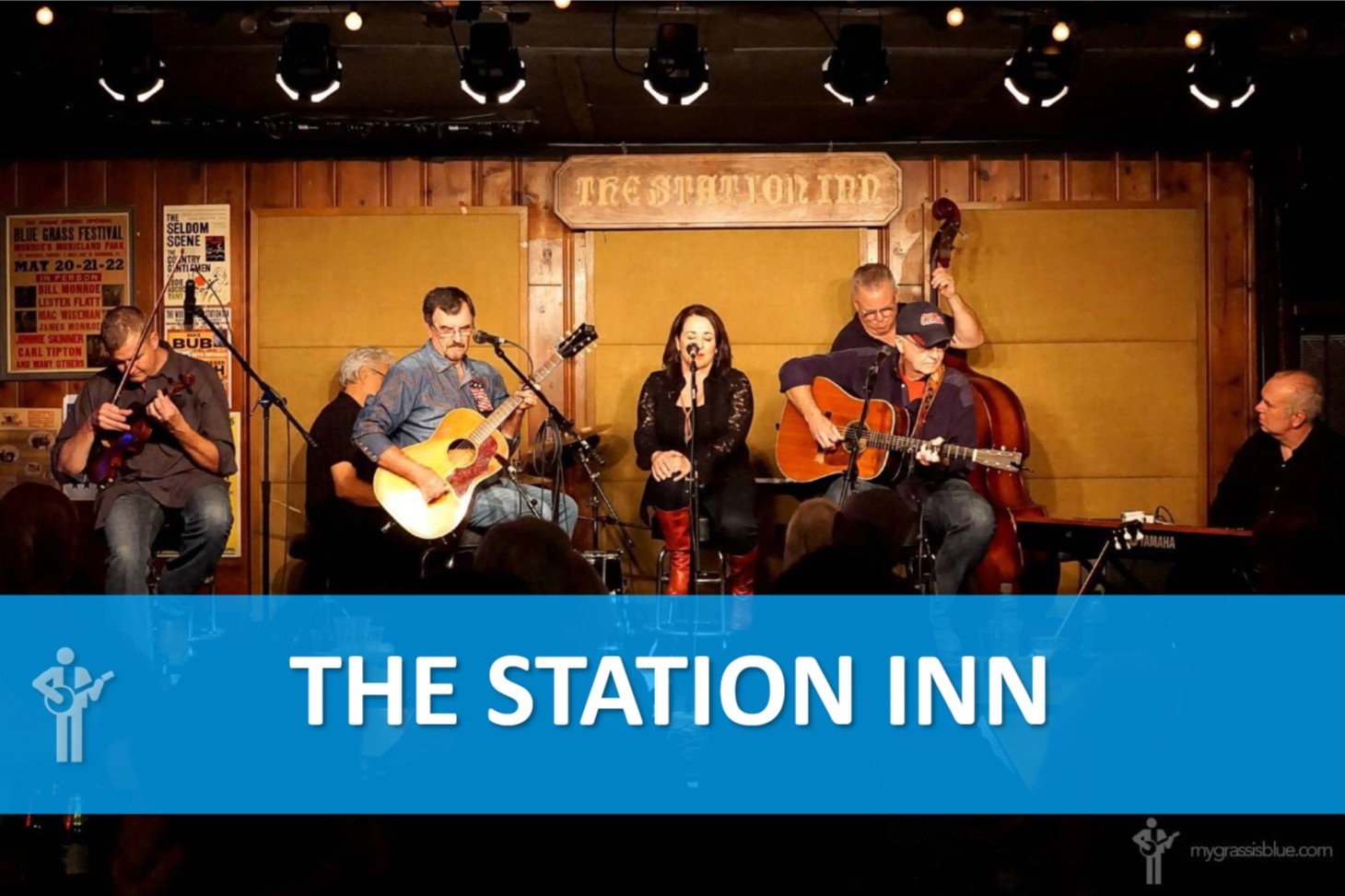 What started out in November of 1925 as a simple for-radio broadcast of old-time music from Downtown Nashville on 650AM WSM, the WSM Barn Dance, is today the longest continuously running live radio programme in the world. Known since the late 1920s as the Grand Ole Opry and branded as ‘The Show that Made Country Music Famous’, the Opry‘s permanent home since 1974 – prior to which, since 1943, it was staged in Nashville’s Ryman Auditorium – has been the 4,400-seater Grand Ole Opry House located in the Music Valley neighbourhood some 9 miles east of Downtown Nashville. Both as big and as well-oiled a commercial enterprise as you’ll find anywhere in present-day Music City and a tourist must-do, embarking on a backstage tour of the Opry House, and especially in conjunction with a tour of the aforementioned Ryman Auditorium, gives an awesome insight into what it is that turned Nashville into the centre of the country crooning rhinestone universe.
A good-natured riot. 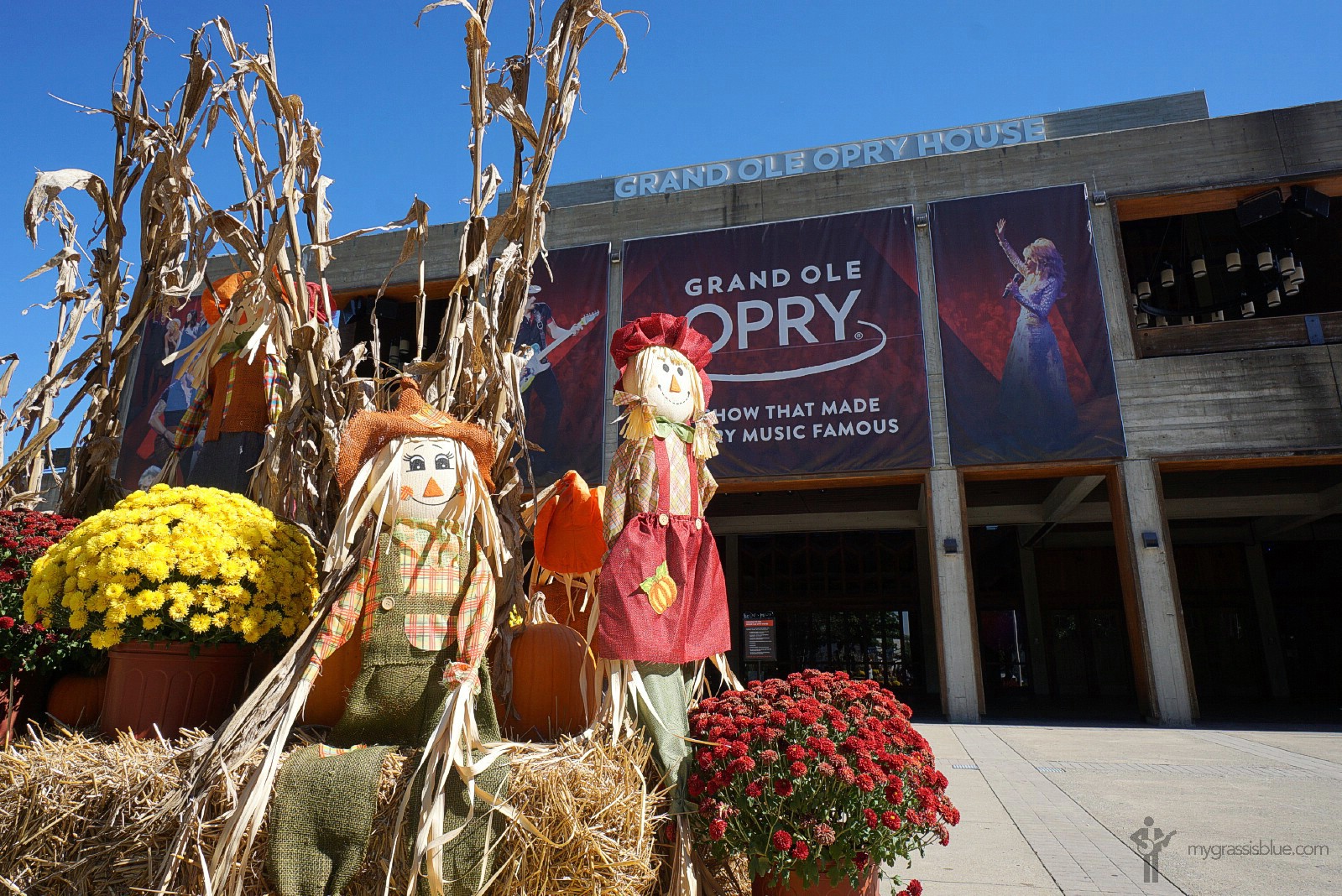 The Grand Ole Opry House, built in the early 1970s and hosting its first Grand Ole Opry performance on March 16 of 1974, a day after the last Opry performance at the Ryman, has aged well; it doesn’t look to be into its fourth decade as the seat of country music, hardships aside (see below). It’s an impressive space, both inside and out, and might just be an attraction to a certain breed of architect as well as to music types. The rustic, boxy lines of the building’s hulking form, its massive wooden entrance doors crested by stained-glass windows, and the rich albeit dark and almost industrial tones of the interior all evoke a feeling that you’re entering a place of worship. And maybe that’s what it is to some, the staunch C&W devotees. 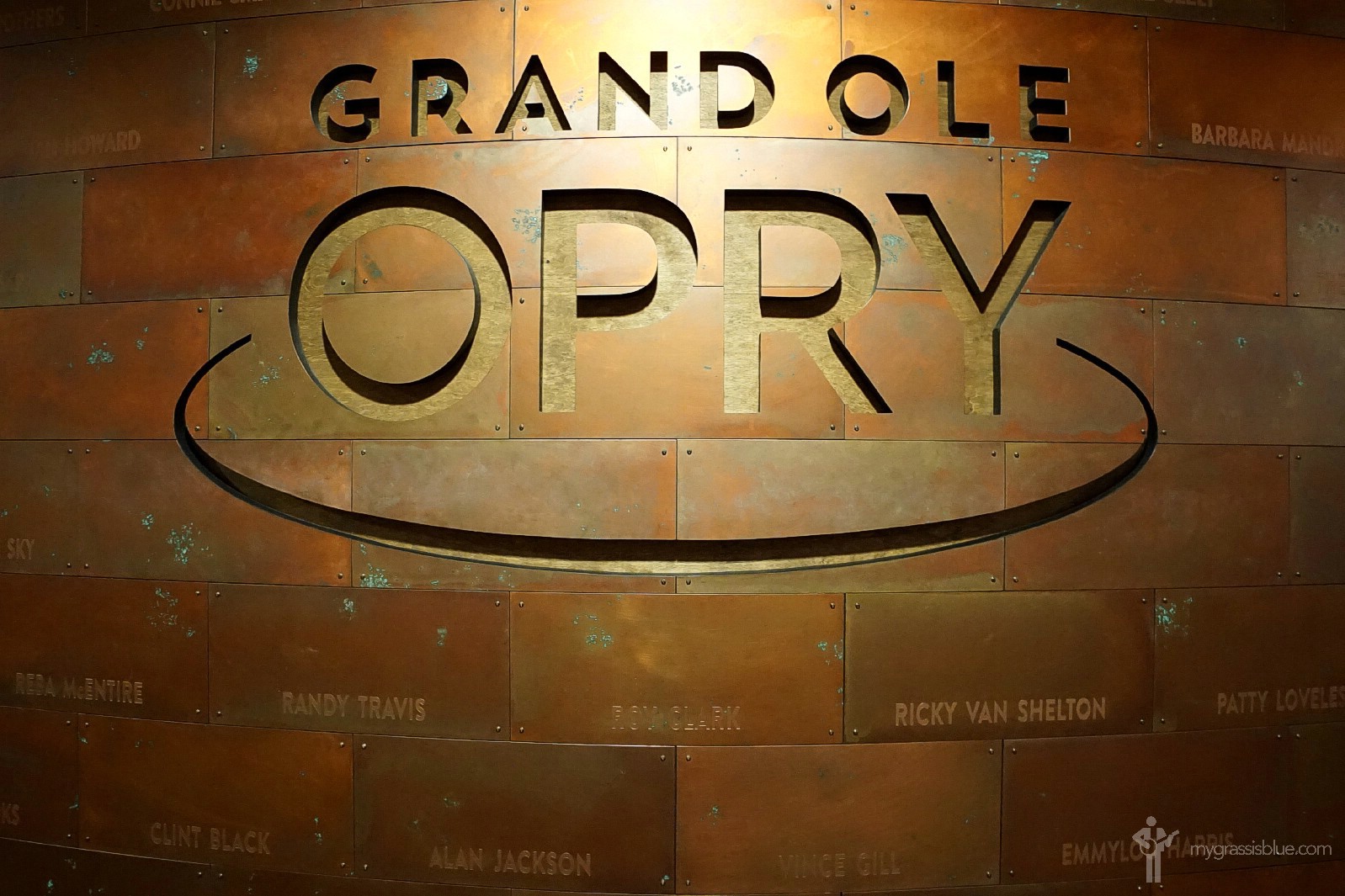 No offense at all to the people sitting in the seats, but the real show is backstage.

Seemingly over a million visitors a year pony up the entrance fee enabling them to be whisked through this modern country cathedral (the Ryman is and always will be the ‘Mother Church’), both front of house and, way more intriguing, the VIP spaces of backstage. Insightful stops in the Artists Entrance Lobby (where performers check-in with security and get their dressing room assignments); at the bronze plaques of the Grand Ole Opry Post Office signifying the personal mailboxes of invite-only Opry Members; in the palatial Family/Green Room where artists and their VIP guests mingle hang out; and a peak into some of the 18 themed and lavishly decorated dressing rooms take up the bulk of the 1-hour Backstage Tour itinerary. It is, and no mistake, an enjoyable and educational peek at the time-honored tradition and ritual of the Opry with eye-openers and surprises aplenty. For example, for such a large venue I was struck by how compact the immediate back-of-stage environment of the Opry House is. Palatial and comfortable yes, but roomy no. 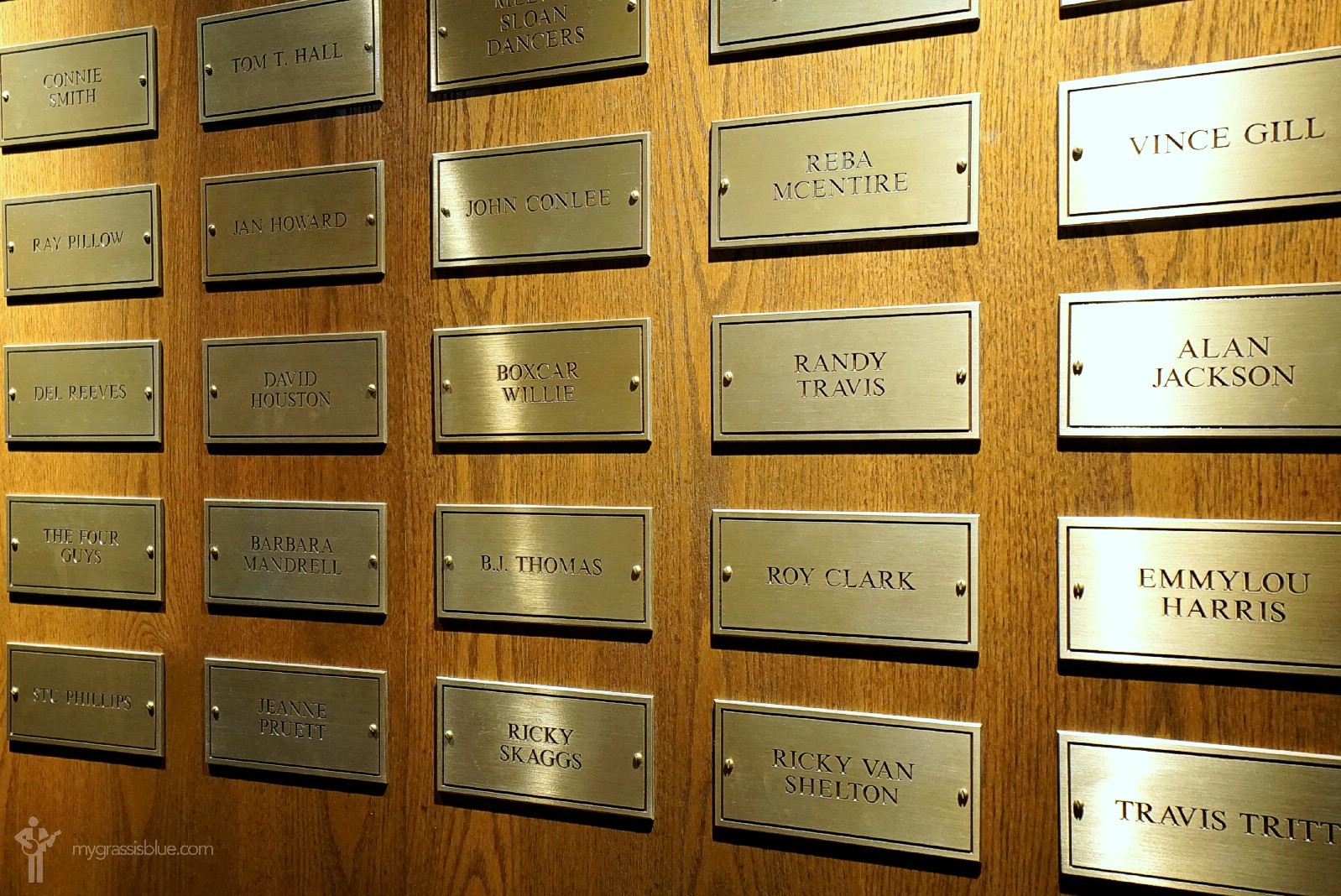 Being invited to become a member of the Grand Ole Opry, a decision made exclusively by the show’s management and one seemingly based on ‘a combination of career accomplishment and commitment’, is considered one of country music’s crowning achievements. As of October 2020 there are a total of 66 Opry members, although over 200 artists have held membership since the show’s inception in late 1925 (membership ceases if the artist dies, if they forgo their membership, or if they suffer the indignity of it being rescinded from them by Opry management).

The Opry representatives, Judge Hay and David Stone, liked what they heard and told Monroe “if you ever leave the Opry, it’ll be because you’ve fired yourself.” 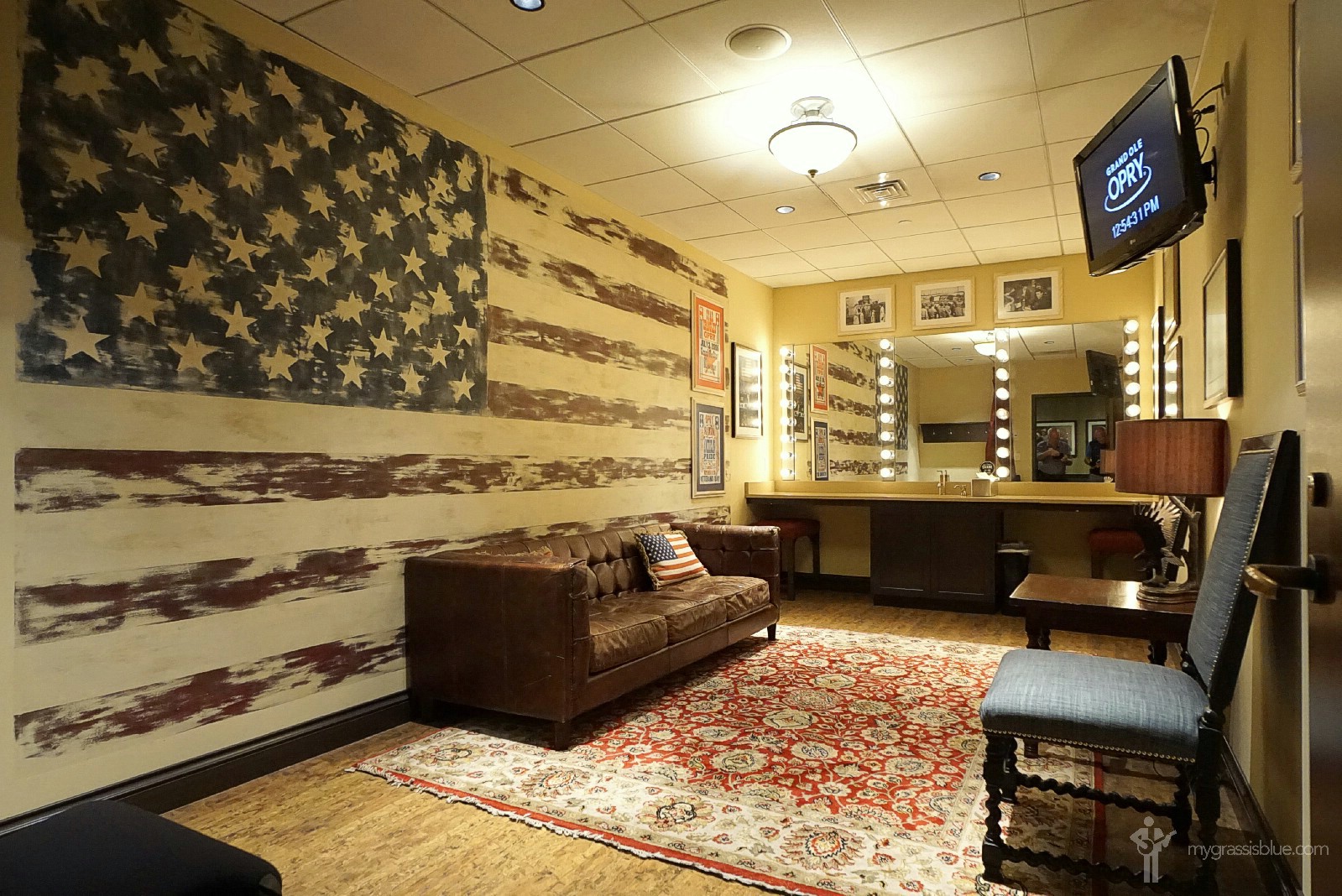 Once blank canvases of simple fluorescent light and mirrors, today the 18 backstage dressing rooms of the Grand Ole Opry House, each of which is numbered with an oversized guitar pick embedded in the floor in front of the door, are unique and lavishly-decorated spaces that reflect both the history of the Opry and the rich culture of the country music genre. We stole a peek through the doors of a few of the rooms as we were en route to the stage area: Dressing Room 9, a.k.a. ‘It Takes Two’, a room adorned with pictures of iconic duos (George & Tammy, Loretta & Conway, Dolly & Porter); Dressing Room 19, a.k.a. ‘Wagonmaster’, a velvet-heavy Marty Stuart-designed tribute to Porter Wagoner; Dressing Room 3, a.k.a. ‘Little Jimmy’, a rhinestone-speckled tribute to diminutive Jimmy Dickens inspired by the outlandish humor he brought to the Opry stage; and, of course, Dressing Room 1, a.k.a. ‘Mr. Roy King of Country’, whose door is always open as a way of welcoming friends, fans, artists and tourists alike. Memorable, each and every one. As was this, Dressing Room 5, a.k.a. ‘Stars and Stripes’. One of the only non-music inspired rooms, it’s a shout-out to the service men and women of America. 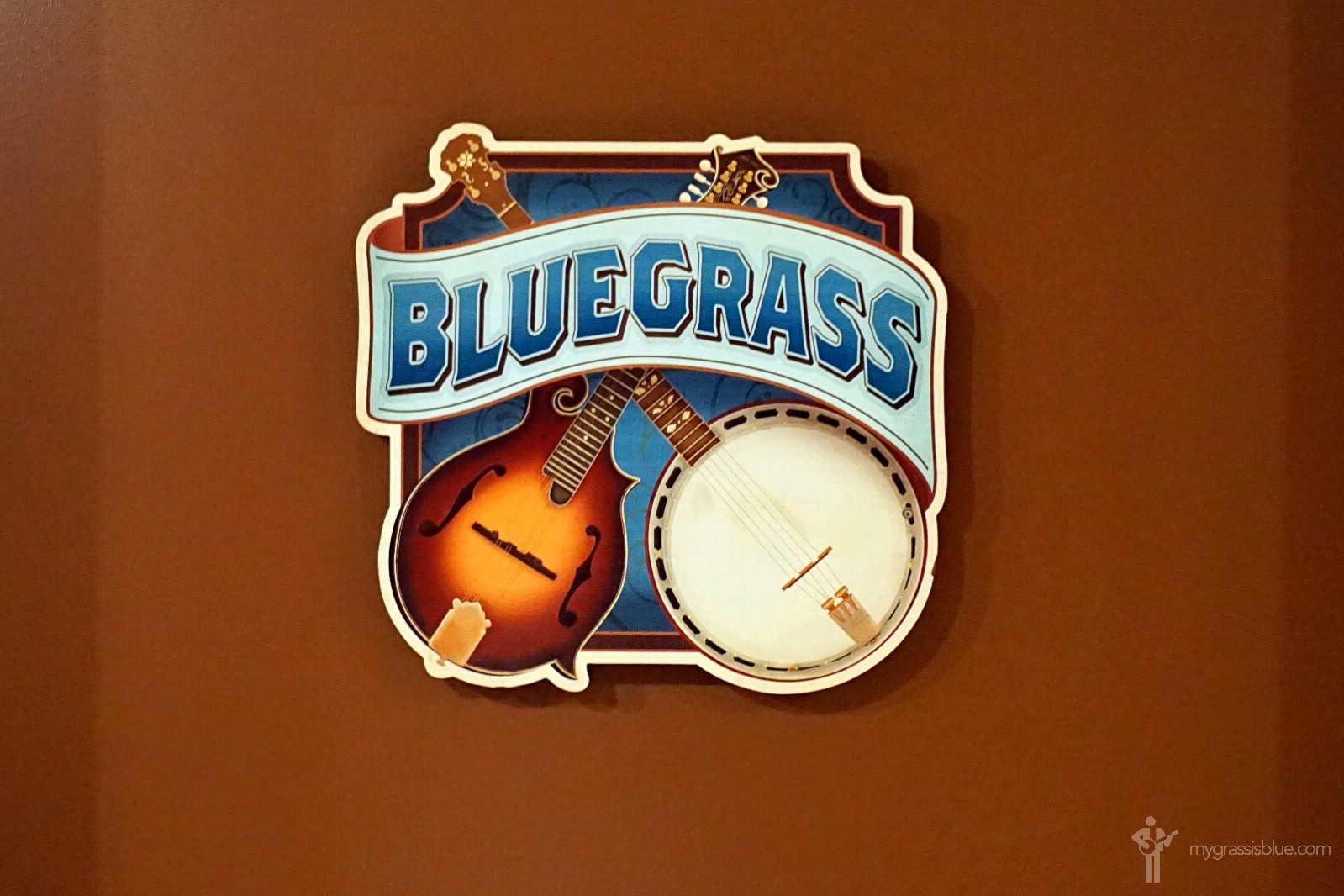 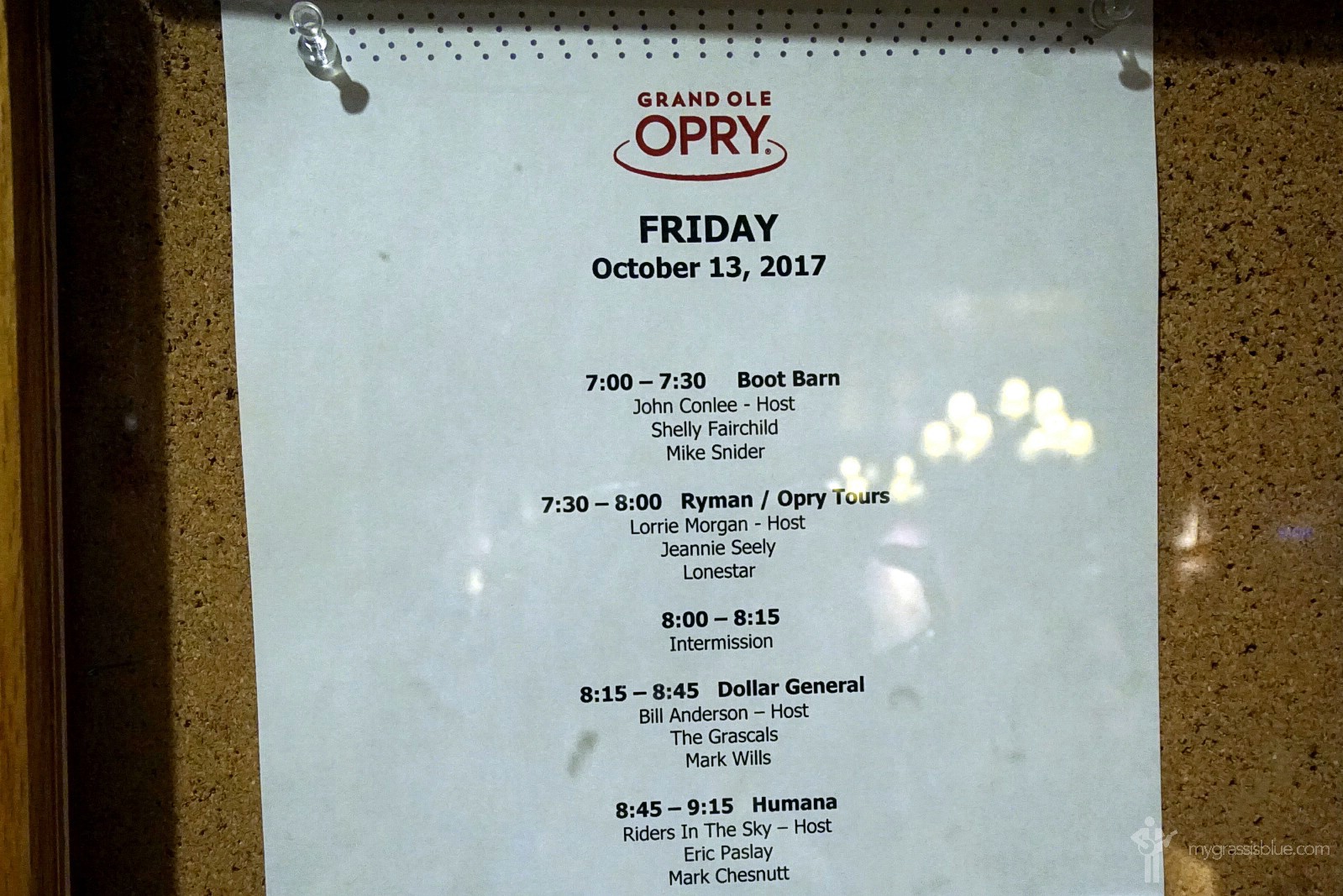 A missed opportunity. Terry Eldredge of The Grascals informed us a few days earlier at the ‘A Lester Flatt Celebration‘ in Sparta, TN, that had we been around Nashville days earlier that he would have invited us backstage at the Opry as his VIP guests. Damn. Double damn. 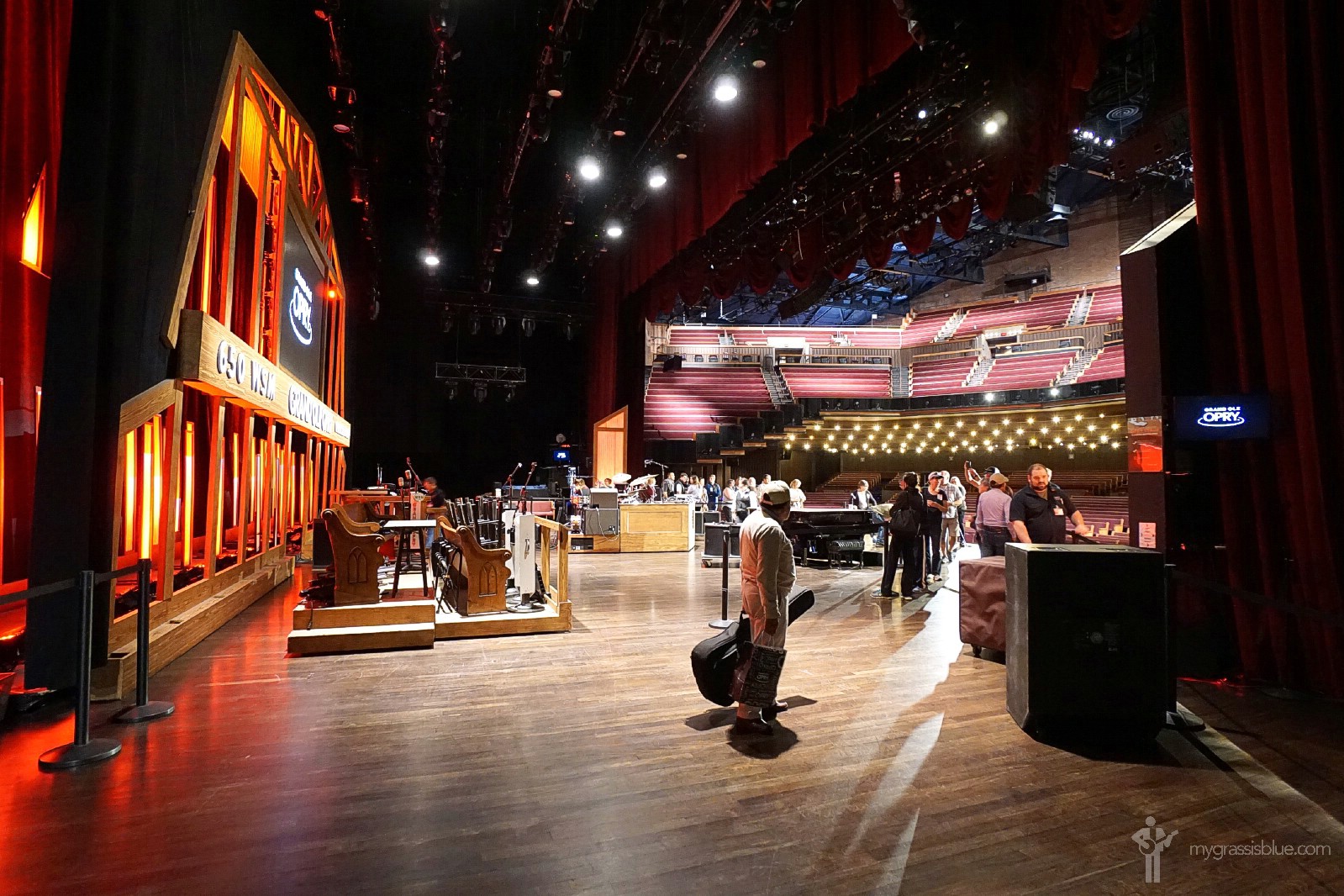 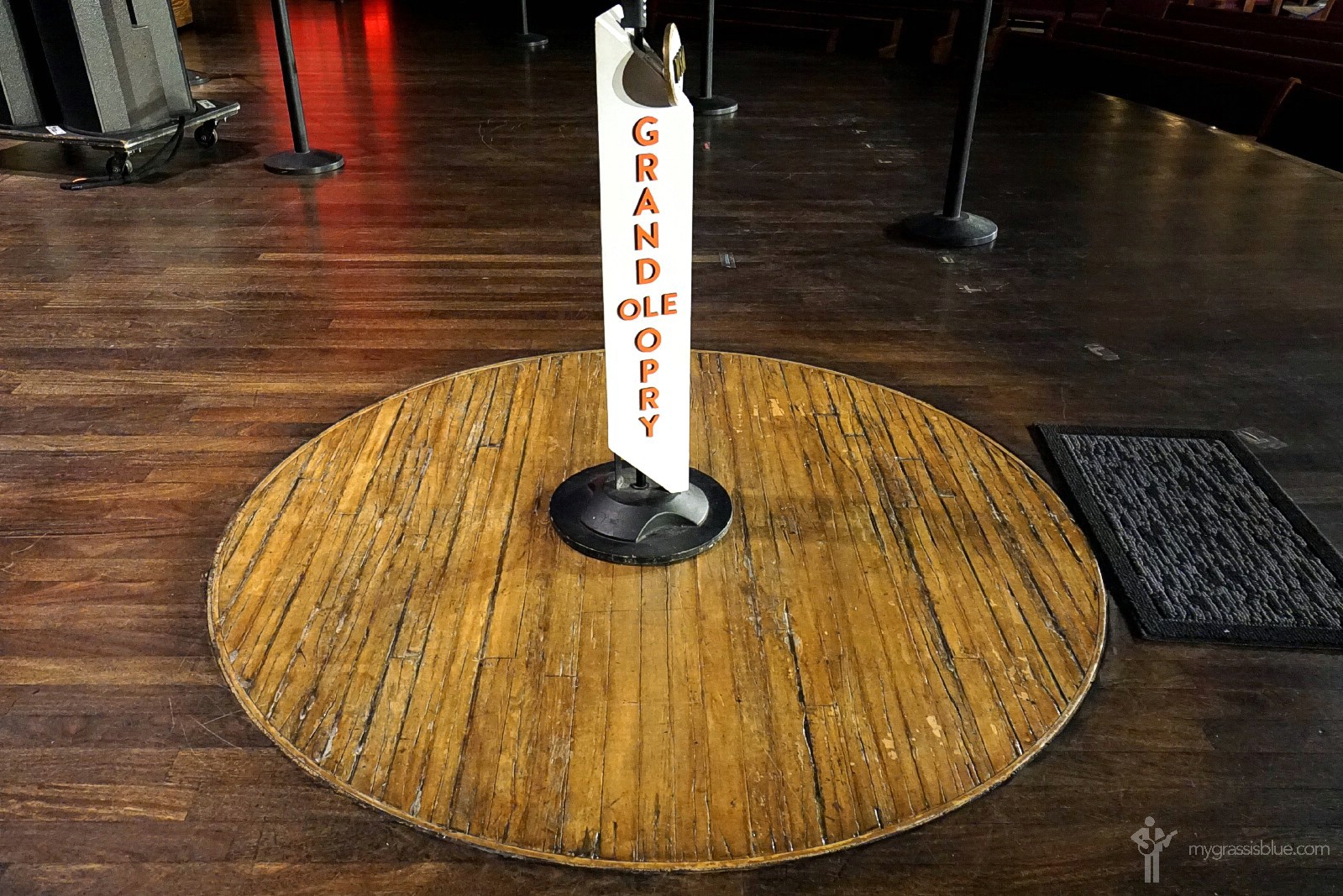 THE CIRCLE | ‘The Circle’ on the expansive stage of the Grand Ole Opry House, Music Valley, Nashville, Tennessee. October 17, 2017.

Hallowed musical ground. Of course the Opry Backstage Tour includes a walk across the stage for the requisite but optional purchase-at-the-end-of-tour photo op standing in the famous ‘Circle’, a six-foot-wide circle of aged wood that sits center stage and that was famously removed from the Ryman stage to be set into the stage here when the Opry moved to its present location from Downtown Nashville in March of 1974.

The Opry. Where the shown must go on, and does. Ninety-two years now and counting. 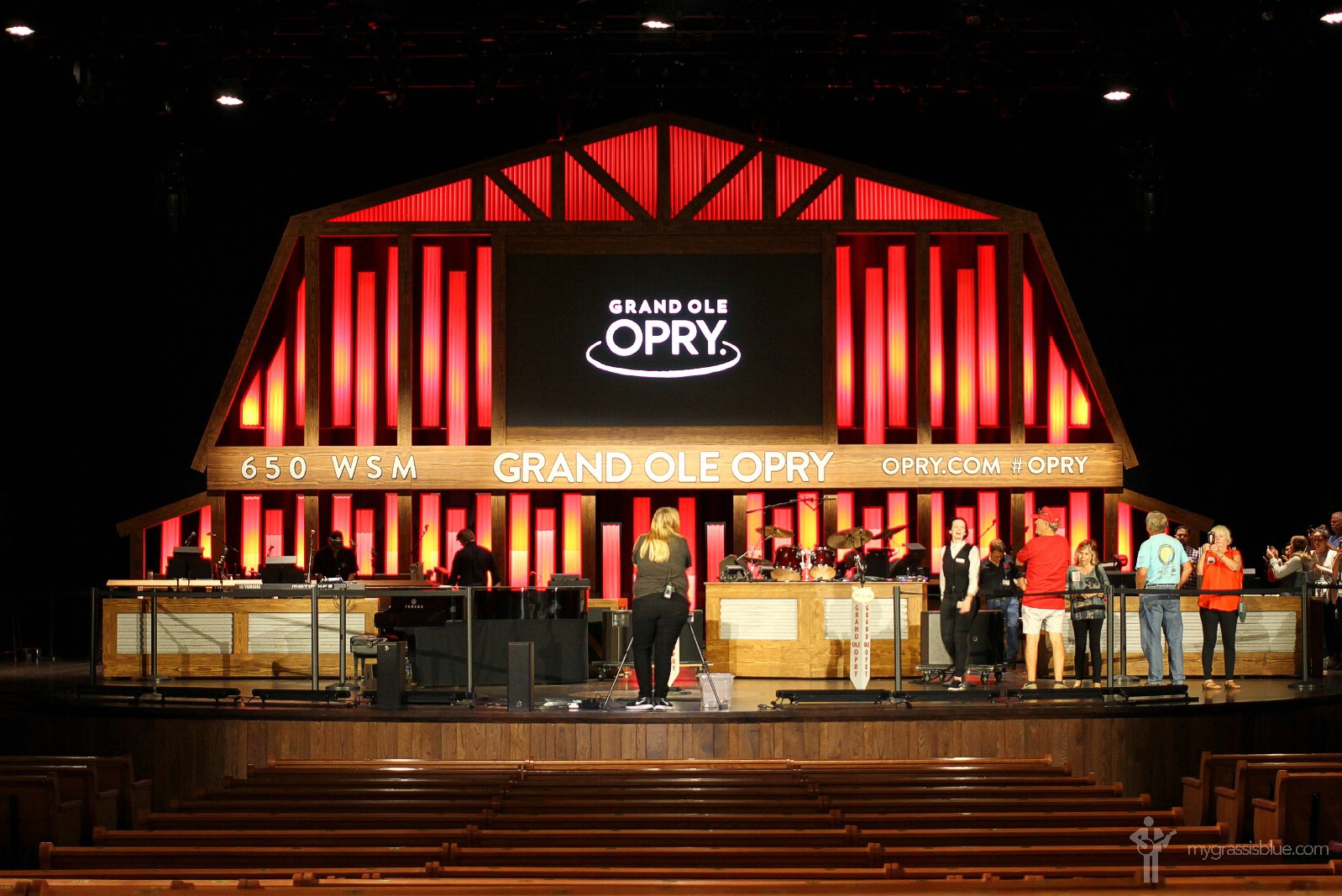 The stage backdrop of the Grand Ole Opry House reflects the Opry‘s origin as the 650AM WSM Barn Dance. Having been broadcast without interruption on Opry nights since its first broadcast on November 28 of 1925 means that today the Opry is the longest continuously running live radio programme in the world, a run it managed to sustain even during the devastating floods of the first two days of May 2010, floods that crippled Nashville and closed the Opry House for 5-plus months – the level of the nearby Cumberland River rose such that its waters surged through the doors of the Opry House and flooded the whole building to a depth of some four feet. Despite damage that included a ruined stage, pews, curtains, floor and the walls, the music or the broadcasts never stopped as the Opry found itself Nashville venue-hoppin’ throughout the clean-up summer of 2010. After undergoing $20 million in renovations – the venue’s entire ground floor, including the stage, had to be totally rebuilt while the dressing rooms received the makeovers enjoyed by artists and tourists today – the Opry House reopened in October 2010. Today a somber watermark line on the wall in the backstage Family/Green Room showing the level of the flood waters is the only sign of the floods that caused billions of dollars in damage, claimed 31 lives (11 in the immediate Nashville area), and led to a third of Tennessee being declared a major disaster area by the federal government. The Opry. Where the shown must go on, and does. Ninety-two years now and counting. 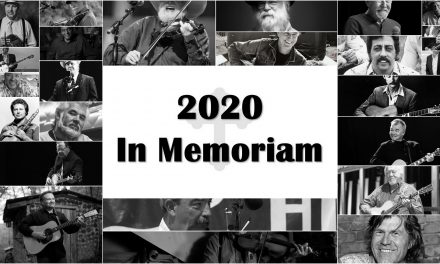 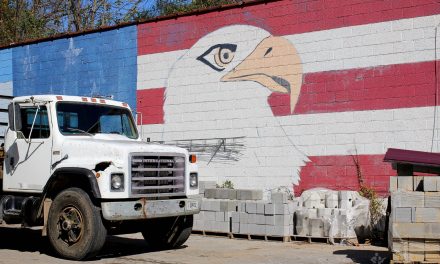 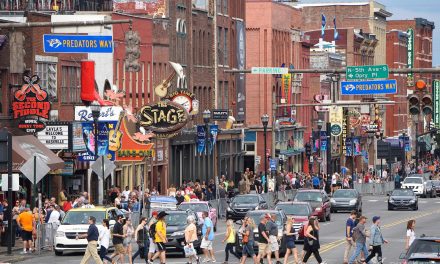 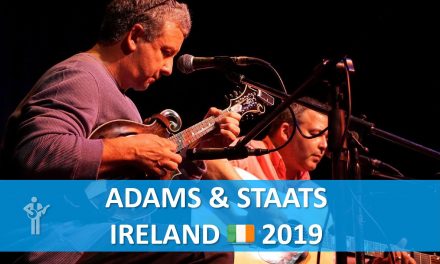